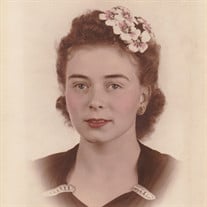 Her adventure began on Sept. 5, 1927 in Birmingham, Alabama. The daughter of Major Terrell Hays of Warrior, Alabama and Cora Marie Moore Pope Hays of James Station, Georgia, she was dressed like her Shirley Temple doll, but stories are still... View Obituary & Service Information

The family of Mrs. Marie Hays Wright created this Life Tributes page to make it easy to share your memories.

Send flowers to the Wright family.