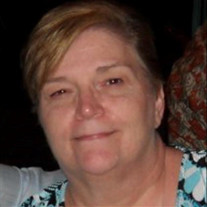 Marilyn Gilbert Sullivan, 69 of Navasota, passed away Saturday, January 26th at St. Luke’s Hospital in Houston surrounded by her loving family. Visitation with family and friends will be held from 5:00 – 7:00pm, Friday, February 1st at Nobles Funeral Chapel. A celebration of her life will be at 10:00 am, Saturday, February 2nd, also at the funeral home, with interment immediately afterwards in Oakland Cemetery. Rev. Randy McReynolds will officiate. Arrangements are under the direction of Nobles Funeral Chapel. Marilyn was born April 16, 1949 in Navasota to Kenneth and Evelyn (Poteete) Gilbert. She attended and graduated from high school in Navasota. She met a handsome seaman named Robert Eden Sullivan at the Tastee Freeze in Navasota and after a brief courtship, they married on August 18, 1967 at the First Baptist Church in Navasota. The couple moved to California for a short time while he completed his service in the Navy and then returned to Navasota, where they raised three children. Marilyn enjoyed reading, crocheting and having her mind challenged while watching Jeopardy. She enjoyed weekend get-togethers with her children and grandchildren. She was an animal lover with a soft spot for cats. Marilyn enjoyed classic country music, a nice hot cup of tea and italian cream cake. She will be missed dearly by her girls and grandbabies. She is survived by daughters and son-in-law Sharon Sullivan of Cypress, Sara Kathleen “Kate” Thomas of Cypress, and Carol and Jason Eaton of Navasota; brother and sister-in-law Steve and Sandra Gilbert of Navasota; and grandchildren Lauren Sullivan, Mackenzie Sullivan, Jordan Thomas, Lily Eaton and Sofia Eaton. Serving as pallbearers are Chad Burk of Willis, Jason Eaton of Navasota, Steve Gilbert, Jr., of Bryan, Scott Gilbert of Navasota, John Lawrence, Jr., of Brenham and T. C. Duty of Katy. Marilyn was preceded in death by her parents; husband Robert “Bob” Eden Sullivan; son Robert Christopher Sullivan and brother James Larry Gilbert. You are invited to leave kind words and fond memories at www.noblesfuneral.com.

The family of Mrs. Marilyn Gilbert Sullivan created this Life Tributes page to make it easy to share your memories.

Send flowers to the Sullivan family.