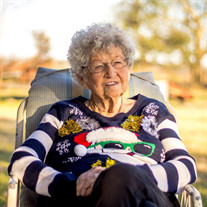 Mrs. Mary S. Dudley, 91 of Bryan, Texas (formerly of Iola), passed away Saturday, December 18th at The Fortress Nursing Home in College Station. A memorial service celebrating her life will be held at 10:00 am, Thursday, January 6th, 2022 at Evergreen Freewill Baptist Church in the Keith Community near Carlos, Texas with Rev. Jeff Morgan presiding. Arrangements are under the direction of Nobles Funeral Chapel. Mary was born April 27, 1930 in Brazoria County to Fred Cleveland and Betty Sue (Manley) Stedman. She was one of six children. She married the love of her life, Elvin Earl “Bugs” Dudley on September 1, 1951 and together they had three children. They remained happily married until his death in 2007. She worked as an administrative assistant for Texas Instruments for several years. She had a warm heart, great sense of humor and an open invite to her home for all who knew her. Called “MawMaw” by friends and family, she enjoyed dancing and cooking , she was said to have baked pies like “nobody’s business”. Earlier in life she loved roadtrips, camping and quilting – all of which she did with joyfulness and anticipation. Her grandkids were her passion and she was happiest surrounded by her family. She is survived by her son and daughter-in-law, Freddy and Nancy Dudley; daughters Terry Dudley and Rhonda Dudley (Brian Lorren); grandchildren Shane and Casie Drachenberg, Misty and Louis Rodriguez, Sarah and Alex Hickey, Emma Dudley and fiance Jason Pitz, Cole Dudley, and Dusty and Natana Chichester ; great-grandchildren Allison Rodriguez and Chasers Arispe, Louis Rodriguez, Jr., Carson Hickey, Kayla Hickey, Madelyn Hickey, Kase Chichester and Kash Chichester and numerous nieces and nephews. Mrs. Dudley was preceded in death by her parents and husband, Bugs Dudley and five siblings. You are invited to leave kind words and fond memories at www.noblesfuneral.com.

The family of Mrs. Mary S. Dudley created this Life Tributes page to make it easy to share your memories.

Send flowers to the Dudley family.