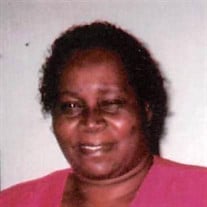 Mary Maglean Scott was born and raised in Anderson Texas. She was born on June 2, 1947 to Lillian Turner and Ronney Minor. She attended school in both Anderson and Richards, Texas. She passed away peacefully on June 8th at Brazos Valley Hospice in Bryan, Texas with her daughter by her side. Her home going celebration will be held on Saturday, June 17, 2017 at 1:00pm at Greater First Missionary Baptist church in Anderson, Texas with visitation beginning at noon. Rev. Willie Buckner will officiate. Interment will be in the Little Flock Cemetery in Piedmont, Texas. Arrangements are under the direction of Nobles Funeral Chapel. Mary was known for her big heart and always giving people a place to stay when in need. She was also known for “telling it like it is”. She was a very good caregiver to many of her home healthcare patients. Her favorite saying to her kids and grandkids was to “keep on living because ya’ll are going to get old someday, too”. Mary was baptized at an early age and was a faithful member of Greater First Baptist Church in Anderson until her health started to fail. She was united in marriage to Richard Fagan and was blessed with one daughter, Cynthia Denise Fagan. Fifteen years later she would be blessed with another daughter, Risha La’Chell Fagan. She is preceded in death by her mother, Lillian Turner; father Ronney Minor; grandmother Mary Turner and great-grandson Kentrevious Fagan. She leaves to cherish her memories two daughters, Cynthia Fagan and Risha Fagan (Darrell), both of Anderson; one goddaughter, Gaila Felder of Bryan; three sisters, Lillian Turner of Glendale, Arizona, Jeanette Williams of Anderson and Hazel Dean of Navasota; five brothers, James Lee Scott (Jean) of Houston, Edward Scott of Germany, Allen Williams (Annie) of Navasota, L. C. Williams of Navasota and Robert Williams (Beverly) of Navasota; two stepsisters, Mae Lee Love (Glen) of Navasota and Annie Mae Johnson of Houston; two stepbrothers, Billy Williams of Houston and James Mason of Huntsville; four grandchildren, Timmis Fagan (Autumn), Corey Fagan (Jasmine), Demondre Offing and Mar’Tavion Offing; five great grandchildren and close friends Jean, Ella Wee Minor and Milan, along with a host of nieces, nephews, family and friends. Serving as pallbearers are Ersie Minor, Lonnie Lee, Jr., Kennard Minor, Marshall Calhoun, Robert Lowery, Rapheal Mitchell, Donnie Mills and Andre Sargent. Honorary pallbearers include Timmis Fagan, Corey Fagan, Demondre Offing, Mar'Tavion Offing, Kaiden Fagan and Jah'Corian Fagan. Friends and family are invited to leave kind words and fond memories at www.noblesfuneral.com. Friends and family are invited to leave kind words and fond memories at www.noblesfuneral.com.

Mary Maglean Scott was born and raised in Anderson Texas. She was born on June 2, 1947 to Lillian Turner and Ronney Minor. She attended school in both Anderson and Richards, Texas. She passed away peacefully on June 8th at Brazos Valley... View Obituary & Service Information

The family of Mary Scott Fagan created this Life Tributes page to make it easy to share your memories.

Mary Maglean Scott was born and raised in Anderson Texas. She...

Send flowers to the Fagan family.