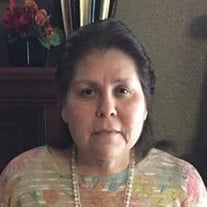 Mary Jane Ybarra, 60 of College Station, passed away Monday, August 19th at The Med in College Station. Visitation with family and friends will be held from 2:00 pm - 5:00 pm, Sunday, August 25th at Nobles Funeral Chapel. Funeral services will be held at 10:00 am, Monday, August 26th, also at the funeral home with interment following in Oakland Cemetery. Rev. Lupe Ybarra will officiate. Arrangements are under the direction of Nobles Funeral Chapel. Mary Jane was born in Navasota, Texas on March 14, 1959 to Pedro and Trinadad (Melchor) Ybarra. She attended school in Navasota and was a homemaker. She enjoyed watching the Texas Aggies and Dallas Cowboys on television with all of her nephews and loved animated Disney movies and Golden Girl reruns. Mary Jane was an immaculate housekeeper but hated to cook, making her a big fan of frozen dinners. She always began a phone call to family and friends with the words, "Did you call me?" even though she knew they hadn't. She is survived by her daughter, Trinadad Pichardo; sisters and brothers-in-law Frances and Tommy Bellow, Josie Urbano and Helen and Nick Quezada; brother Pete Ybarra and countless nieces, nephews and cousins. Serving as pallbearers are Nick Quezada, Steve Quezada, David Quezada, Ruben Quezada, Tony Luna and Sam Torres. Serving as an honorary pallbearer is Joseph Madison. She was preceded in death by her parents and brothers Frank Ybarra, Augustine Ybarra, Mike Ybarra, and Johnny Ybarra and sister, Lucille Chavarria. You are invited to leave kind words and fond memories at www.noblesfuneral.com.

The family of Mary Jane Ybarra created this Life Tributes page to make it easy to share your memories.