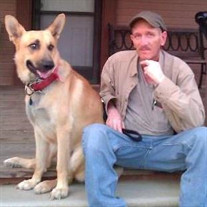 Mr. Michael Lys, 51, of Navasota passed away Wednesday, February 8, 2017 at Grimes St. Joseph Hospital in Navasota. Visitation with family and friends will be held from 2:00 - 5:00pm, Sunday, February 12th at Nobles Funeral Chapel. A celebration of his life will be at 10:00am Monday, February 13th, also at the funeral home with Rev. Jeremy Woodley and Rev. Amy Haralson officiating. Interment will follow in Oakland Cemetery. Arrangements are under the direction of Nobles Funeral Chapel. Michael was born May 28, 1965 in Navasota, Texas to Robert and Bessie Ann (McDonald) Lys. Michael served his hometown of Navasota as a police officer for over 20 years and was proudly named officer of the year. He also worked at NOV Grant Prideco. He married Kathryn Lynn “Kitty” Goggans on December 10, 2007. He was an avid outdoorsman and enjoyed hunting and fishing with his dad, Robert. He was a loving and compassionate husband, son, father and friend, often giving those closest to him nicknames. He treasured the time spent with his children and spoke of them daily. He was a jack of all trades and would take in anyone or anything, as evidenced by the love he shared with his devoted canine companion, a rescued German Shepherd named Bud, and the chickens he fondly raised. Mike’s Bible, often read, highlighted and side-noted with the things most important to him, speaks volumes of the man who had difficulty admitting his soft-heartedness, but rather showed it in his actions around those he held dear. Michael is survived by his wife Kitty Lys of Navasota; parents, Robert and Bessie Ann Lys of Navasota; daughters and son-in-law Melissa Linn Flournoy and husband Stephen of Singleton and Raina Michelle Goggans of Navasota; sons Michael Lee Lys and Marcus Lloyd Lys, both of Navasota; brother Bobby Lys and wife Sandra of Bryan; mother of his children, Sandie Lys, of Navasota; granddaughter Raelee Lynn Goggans; niece Kathryn Lys of Bryan and nephew Jonathon Lys and wife Lauren of Arlington; great nephew Jonah Lys; sister-in-law Pam Kearney and husband Tim of Magnolia; and father-in-law Lonnie Goggans. He was preceded in death by grandparents Bessie T and Sam H. McDonald, Marie and Lee Lys, numerous aunts, uncles and cousins and mother-in-law Lee Goggans. Serving as pallbearers are Jim Studhalter, Marc Neutzler, Bill Fuqua and John Pool, all of Navasota, Craig Wiesepape of Brenham and Monte Parker of College Station. Honorary pallbearers are Bud Roark, Mitchell Roark, Tim Kearney, Monte Parker, Dale Cuthbertson, Randal Jones, Lewis Jackson, Andrew “Cap” Turner, John Lawrence, Jr., and John Lawrence, Sr. In lieu of flowers, memorial contributions may be made in Michael’s memory to First United Methodist Church of Navasota, 616 Holland Street, Navasota, TX., or First Baptist Shoebox Ministry, 301 Church Street, Navasota, TX. You are invited to leave kind words or fond memories at www.noblesfuneral.com.

The family of Mr. Michael Lys created this Life Tributes page to make it easy to share your memories.

Send flowers to the Lys family.