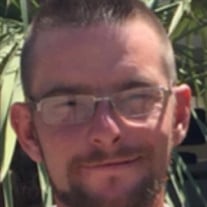 Michael "Mike" Robert Bell, 35 of Navasota, passed away Monday, December 18th. A memorial service celebrating his life will be held at 2:00pm, Saturday, January 6th at the Evergreen Freewill Baptist Church Cemetery in Iola (Keith), Texas. Major David Sams will officiate. Mike was born September 19, 1982 in Ft. Lauderdale, Florida. After high school, he studied mechanics. He was an avid Harley Davidson enthusiast and had obtained his certification in Harley Davidson mechanics. Music was a huge part of him; he played guitar, sang and wrote songs. He played guitar in the band at church as well. He cherished time with his family and was a phenomenal cook. Mike was outgoing, enjoyed helping people and had a great sense of humor. His reply to most anything was a shake of his head and a “this is not how this works…” A favorite quote of his found on his Facebook page is the Boondock Saints Prayer: “And shepherds we shall be for Thee, my Lord, for Thee. Power hath descended forth from Thy hand Our feet may swiftly carry out thy commands. So we shall flow a river forth to Thee and teeming with souls shall it ever be. “ Mike is survived by his parents, Robert Lee and Paula Bell; daughter Cheyan McCallum; sons Robert Avery Bell and Zachary Taylor Bell; sisters and brothers-in-law Deborah Wynn Erskine, Rachel and Cory Thomas and Tami and Rich Romano; brothers David Wayne Weihausen, Donald “Wade” Weihausen and Damien Jones; granddaughter Eevelyn Serinity McCallum; aunts and uncles Joe and Missy Yoist and Buddy Hazell; nieces and nephews Megan and Paul Bennett, Justin Erskine, Shawn Erskine, Amber and Mikey Cashon, Staci and David Osburn, Amy and Max Groh, David Austin Weihausen, Hazel Belle Weihasen, Adam Wyatt Thomas, Haley Paige Thomas, Reagan Bryan Rhoades, Skylar Stephen Rhoades, Brock Harrison Rhoades, Gavin Ross Romano and Mason Grounds Romano; great nieces and nephews Landry and Lane Cashon, Lylian Kahler, Nathan Osburn, Jaeden Kahler, Katie-Lynn Kahler, Keira Bennett and Jackson Groh and cousin Scottie and Rick Flores and their son, Ricky. He was preceded in death by his grandparents, Woodrow and Anna Mae Bell and Tommy and Wilma Boykin; aunt Lucille Hazell and nephew James Austin Lain Kahler. You are invited to leave kind words and fond memories at www.noblesfuneral.com.

The family of Mr. Michael "Mike" Robert Bell created this Life Tributes page to make it easy to share your memories.

Send flowers to the Bell family.