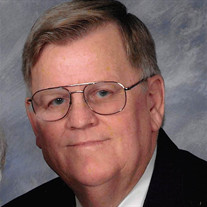 Mr. Neal Bosse, 73 of Navasota, passed away peacefully Thursday, June 20th at Memorial Hermann Hospital in Houston, Texas. Visitation with family and friends will be held from 5:00 pm – 7:00 pm, Saturday, June 22nd at Nobles Funeral Chapel. A celebration of his life will be on Sunday, June 23rd at 2:00 pm at Friedens Church of Washington, UCC with Rev. Eric Dehmer officiating. Interment will follow in Friedens Church Cemetery. Afterwards, a reception will be held in the Church Activity Center. Arrangements are under the direction of Nobles Funeral Chapel. Neal was born in Navasota, Texas on August 30, 1945 to Ben William and Menetta (Borgstedte) Bosse. He graduated from Navasota High School and attended Blinn Junior College for two years. On September 5, 1965, Neal married Betsy Lawrence in Washington, Texas and together they raised three children. Neal and Betsy lived in Navasota all of their married life. He loved spending time with his children and grandchildren, as well as other family members and friends. Neal began his working career as an employee of Dickshat’s Appliance Store while he was still in high school. He worked there until he became a partner in the Navasota Roofing Company. After leaving the roofing company, he began a new career with W. E. Gibson’s Insurance Company, where he worked for 25 years until his retirement in 2014. Neal was very active in church and community affairs. He served many terms on the church council and also served as president of the congregation at Frieden’s Church of Washington, UCC. He started as a coach with the Navasota Little League organization in 1966 and coached off and on for the next twenty five years. Neal spent many hours working for the Rattler Booster Club in the concession stands and serving as an officer on the board. He was known for his famous chili making skills and even the referees would buy chili dogs before the games just to get a scoop of his chili. Neal served on several Navasota I.S.D. committees for Superintendent Dr. John C. Webb. Because of his love of Navasota Athletics, he served on the committees responsible for hiring several N.H.S. Athletic Directors. His last community duty included serving on the Grimes County Appraisal District Board. Neal enjoyed life and being around his family and friends. For many years, he met friends every morning for a cup of coffee and discussion of world affairs. He only stopped this after his open heart surgery and could no longer drive. Neal never met a stranger. He made friends easily and always liked being with his friends. He enjoyed working at Gibsons because of the many customers he helped who also became his friends. Family and friends were Neal’s passion, and he will be missed by many. He is survived by his loving wife of almost 54 years, Betsy Bosse of Navasota; sons and daughters-in-law Kevin and Ginger Bosse of Brenham and Eddie and Michelle Bosse of College Station; grandchildren Will and Abby McKeown, Tori and Ben Bosse and Tyler, Trevor and Tanner Bosse; brother and sister-in-law Wayne and JoAnn Bosse of Washington and brothers-in-law and sisters-in-law John and Glenda Lawrence, James and Jeanny Lawrence and Richard and Mikki Lawrence, all of Navasota; one aunt and numerous nieces, nephews and cousins. Serving as pallbearers are grandsons Will McKeown, Ben Bosse and Tyler Bosse; nephews John Lawrence, Jr., Michael Lawrence and Travis Eckert; Casey Dacus, Brandon Eisenman and Mark Finke. Neal was preceded in death by his parents; brother Ben Allen Bosse and daughter, Sandra Elise Bosse McKeown. In lieu of flowers, the family ask that memorial contribution in Neal’s memory be made to any of the following: Friedens Church of Washington, 20301 FM 1155 East, Washington, TX 77880; NISD Rattler Athletics or the Navasota High School Library, 1 Rattler Drive, Navasota, TX 77880. You are invited to leave kind words and fond memories at www.noblesfuneral.com.

The family of Mr. Neal Bosse created this Life Tributes page to make it easy to share your memories.

Send flowers to the Bosse family.