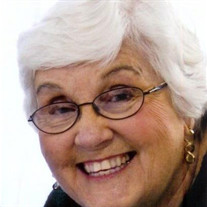 Sarah Nell Cox Mask, 82, was born January 3, 1935 in Murfreesboro, Tennessee and passed from this life on January 3, 2017 at home in Amarillo, Texas, with her loving husband of 53 years, Robert P. "Bob" Mask by her side. Nell loved to recount how her first impression of Bob was that she didn't like him, that he was too arrogant. But with a little Mask charm, he managed to change her mind. The two of them married in a small ceremony in Nashville, TN on November 21, 1963 and Nell began her life as a military wife, stationed first in Tennessee, then Hawaii, to Maryland, and back again to Hawaii, ending up in Austin and finally Navasota. Along the way, they had their two beloved children, Melissa and "Bobby" Mask, and the four of them formed a tight little circle as they moved from base to base, making cherished friends of neighbors and their church families. Once Bob retired from the military, they made their home from 1977 until 2009 in Navasota, TX where Nell became beloved teacher to countless pre-kindergarteners at Jack and Jill and later Mother Goose Daycare. Jesus loves the little children, but Nell gave him a run for his money. She taught children Monday through Friday and again on Sundays as Sunday school teacher for all ages at the Anderson and, later, Navasota Church of Christ. She was the most devoted grandmother to Heather, Nick, and Sam from the moment they were born. Nothing gave her greater pleasure than seeing their accomplishments. Bob and Nell moved to Dumas, TX down the street from Melissa's family in 2009, and a whole lot closer to Bobby's family in Colorado. They once again put down roots and were beloved by their church family and neighbors in Dumas, until they downsized and moved to Brookdale Retirement Community in Amarillo in the summer of 2016. Through it all, Nell was the kindest, sweetest, most Jesus-like soul most of us have ever had the pleasure to know and love. She never met a baby she didn't want to gush over or a dog she didn't want to pet. Despite a long and love-filled life, we are not, and never will be, ready to say goodbye. She is survived by her husband Bob, Robert P. Mask; her daughter, Melissa Mask Wilson, her husband, Matt of Dumas, TX, and their daughter, Heather Rose, of Amarillo, TX; her son, Bob Mask, and his wife, Tori, and their children, Nick and Sam of Denver, CO; her sisters-in-law Corinne Cox of Bon Aqua, TN and Louise Cox of Smithville, TN; as well as numerous extended family. She is pre-deceased by her parents, James Lee and Rose Cox, and her brothers James and Buddy Cox. Visitation is scheduled for Friday, January 6 from 6-8 p.m. and service Saturday, 1:00 at Nobles Funeral Chapel, officiated by Mike Dacus, with internment at White Hall Cemetery to follow.

Sarah Nell Cox Mask, 82, was born January 3, 1935 in Murfreesboro, Tennessee and passed from this life on January 3, 2017 at home in Amarillo, Texas, with her loving husband of 53 years, Robert P. "Bob" Mask by her side. Nell loved to recount... View Obituary & Service Information

The family of Nell Mask created this Life Tributes page to make it easy to share your memories.

Send flowers to the Mask family.