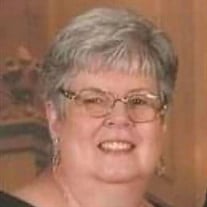 Mrs. Neva Joyce (Grant) Walkoviak, 76 of Plantersville, passed away Thursday, May 5th at CHI St. Joseph Healthcare in College Station. Visitation with family and friends will be held from 5:00 - 7:00 pm, Wednesday, May 11th at Nobles Funeral Chapel. Funeral Services will be held at 9:00 am, Thursday, May 12th at the Church of Jesus Christ of Latter Day Saints in Navasota with interment following in Plantersville Cemetery. Elder David Hickson will officiate. Arrangements are under the direction of Nobles Funeral Chapel. Neva was born August 14, 1945 in Childress, Texas to Thomas Alexander Grant and Madeline Dowdy Grant. She grew up in Austin, Texas along with her two brothers, Kenny and Charles. She raised two sons, Rodney and Scott Hrachovy and was employed by the court system in Travis County. Upon her fathers death at the young age of 58, she inherited some acreage in the Plantersville, Texas area and relocated there. She found employment with Texas A & M University. She settled quickly into small town life and immediately immersed herself into the community, first by becoming a volunteer with the Plantersville Stoneham Volunteer Fire Department and later as a board member. All in all, she dedicated 44 years to PSVFD. The summer of 1995 and a trip to the local convenience market, Imhoff’s, would forever change the mundane. William Walkoviak chose that opportunity to ask her to dinner at the local roadkill café. With a smile and a laugh that had William unsure of what she found so humorous, Neva agreed. The following week William escorted Neva to dinner, with his baggage (aka daughters) in tow. Perhaps it was a sign of the adventures to come when their dinner was interrupted by an announcement that someone in the parking lot had killed an unusually large snake. Half of the diner emptied to see the large serpent ceremoniously draped from the ground, over both sides of the truck bed and touching the ground on the other side! At the end of the meal, William asked her to the horse races and she mentioned that she had complimentary tickets to the Rennassaince Festival. While at the RenFest, a freak thunder shower dumped inch upon inch of rain on the festival and the southern area of Grimes County. Flash flooding made it almost impossible to get out of the festival grounds, and upon arrival at her house, William soon learned that it would be days before he would be able to reach his home. Having only the clothes on his back, the impromptu co-habitation became the beginning of a sweet love story. After a few days and the subsiding floodwaters, William managed to finally make his way home and to shop for a diamond to make their relationship a more permanent one. Neva said “yes” and they were married in Navasota in December of that same year. They enjoyed travelling and cruised Alaska, travelled to England and France, Budapest and several other destinations. Neva was a lot of fun and had a big personality. She enjoyed scrapbooking and collecting coins and stamps. She absolutely adored her grandchildren. Neva is survived by her husband, William T. Walkoviak; sons Rodney Wayne Hrachovy and William Scott Hrachovy; step daughters Rebekah Lynn Walkoviak Frade and husband Kevin, and Maribah Christine Walkoviak Campagnola and husband Shane; brother Charles T. Grant and nine grandchildren. She was preceded in death by her parents, step daughter Rachel Walkoviak and brother Kenneth W. Grant. Serving as pallbearers are: John Walkoviak, Sam Walkoviak, Kevin Frage and Albert Lee. Honorary pallbearers are the board members and volunteer firemen of the PSVFD. You are invited to leave kind words and fond memories at www.noblesfuneral.com.

Mrs. Neva Joyce (Grant) Walkoviak, 76 of Plantersville, passed away Thursday, May 5th at CHI St. Joseph Healthcare in College Station. Visitation with family and friends will be held from 5:00 - 7:00 pm, Wednesday, May 11th at Nobles Funeral... View Obituary & Service Information

The family of Mrs. Neva Joyce (Grant) Walkoviak created this Life Tributes page to make it easy to share your memories.

Send flowers to the Walkoviak family.