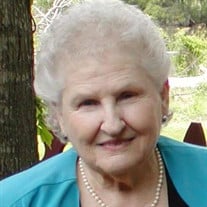 Norma Louise McCune Hester, 88 years young, moved to her mansion in glory on October 23, 2017. Visitation with family and friends will be held from 5:00 – 7:00pm, Wednesday, October 25, 2017 at Nobles Funeral Chapel. A celebration of her life will be at 2:00pm, Thursday, October 26, 2017, also at the funeral home with interment following in Fairview Cemetery, Richards, Texas. Rev. Bill Jackson and Rev. Michael Loftin will officiate. Arrangements are under the direction of Nobles Funeral Chapel. She was born to Teague and Kate McCune on January 20, 1929 in Richards, TX, the youngest of eight children. She married Orval T. Hester, Sr., on September 2, 1949, graduated from Massey Business School and was an Office Manager for Allstate Insurance until she retired with 30 years of service. She bore two children, Orval T. (Tommy) Hester, Jr., and Dr. Yvette Hester. She took under her wing many others, which she considered to be family. She never met a stranger and felt it a personal honor and privilege to pray and plead the blood of Jesus over each and every one. Mrs. Hester is preceded in death by her husband, Orval, her parents and her siblings. She is survived by her son, Tommy Hester and his wife Donna, her daughter Yvette and her husband Oscar Smith, five grandchildren and six great-grandchildren. Serving as pallbearers are Oscar Smith of Bryan, Virgil Stone of Trinity, Haden Hudson of Trinity, John David “J.D.” Fisk of Cypress, Matt Murski of College Station and Gray Czeczinski, also of College Station. You are invited to leave kind words and fond memories at www.noblesfuneral.com.

The family of Mrs. Norma Louise Hester created this Life Tributes page to make it easy to share your memories.

Send flowers to the Hester family.