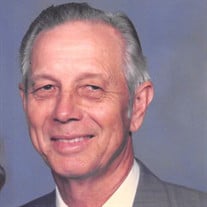 O’Jay Fuchs of Navasota went to be with his Lord and Savior on August 9th 2018. Visitation with family and friends will be held from 2:00 – 4:00pm, Sunday, August 12th at Nobles Funeral Chapel. A celebration of his life will be Monday, August 13th at 11:00am at First Baptist Church of Navasota. Rev. Clyde Larrabee will officiate. A private family interment in Resthaven Cemetery will follow. Arrangements are under the direction of Nobles Funeral Chapel. O’Jay was born on April 10th, 1926 in Cypress, Texas to Theodore and Rosa Mueschke Fuchs. He grew up in Cypress, where he graduated from Cy-Fair High School in 1943. After graduating, he joined the army and fought in World War II in Germany and France. After returning home he met the love of his life, Winona Inez Winslow. They married on November 29th 1947 in Tomball, Texas. After working for Humble Oil for two years, he and his wife decided to go into the dairy business. In 1952 and 1955 their two daughters, Joy and Sheilah, were born. In 1962, they moved with their family to Navasota, and to this day have resided there. Here they worked together milking cows until they sold the dairy in 1976. From this point on, they raised range cattle. Winona says, “We could not have had a better life together.” Everyone who knew O’Jay knew his love of the outdoors. He loved to fish, deer hunt, and garden, but his greatest joy was his family. He was a man of integrity, a hard worker, and still somehow found time to make his family a priority. He was a loyal and loving husband, and loved his wife Winona deeply. Some knew him as the strong and silent type, but he had a kind heart, was full of laughter, and was a wonderful storyteller. He was an amazing 'Dadaw' to the grand-kids and great-grandkids. He would always make them feel special by taking them on adventures in the pasture, judging beauty contests, or playing cards. He was preceded in death by his parents, Theo and Rosa, his sisters, Evelyn Mueller and Maxine Maler, and his brother, Teddy Fuchs. He is survived by his wife of 70 years, Winona, and daughters, Joy Smith and husband Richard, and Sheilah Prihoda and husband C.H. Prihoda, Jr. He is also survived by his 6 granddaughters, Julie Smith-Cunningham, Jennifer Cusimano and husband Kelly, Kristal Reid and husband Elliot, Lindsey Prihoda, Haley Sechelski and husband Matthew, and Abbey Mahoney and husband Bryan. He also has 11 great-grandchildren, Justin and Michael McCoy, Kinley, Lila, and Kylan Cusimano, Nicholas McCann, Blake, Jaydon, and Avalyn Reid, and Portland and Denver Sechelski. The family would like to thank O’Jay’s doctors, nurses, Encompass Home Health Care services, and caregivers Dorothy Sauls, Deborah Bookman, Carrie Tussell, and Shaunda Brown, for all of their care and dedication. You are invited to leave kind words and fond memories at www.noblesfuneral.com.

O&#8217;Jay Fuchs of Navasota went to be with his Lord and Savior on August 9th 2018. Visitation with family and friends will be held from 2:00 &#8211; 4:00pm, Sunday, August 12th at Nobles Funeral Chapel. A celebration of his life will be... View Obituary & Service Information

The family of Mr. O'Jay Fuchs created this Life Tributes page to make it easy to share your memories.

O’Jay Fuchs of Navasota went to be with his Lord and Savior on...

Send flowers to the Fuchs family.