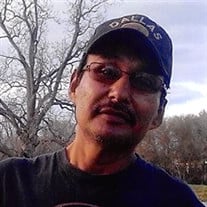 Mr. Orlando Cosino, 46 of Navasota passed away Saturday, June 24th at CHI St. Joseph Hospital in Bryan, Texas. Visitation with family and friends will be held from 5:00 – 7:00pm, Tuesday, June 27th at Nobles Funeral Chapel with a parish rosary following at 7:00pm. A Funeral Mass celebrating his life will be held at 10:30am, Wednesday, June 28th at Christ Our Light Catholic Church with the Rite of Committal following in Oakland Cemetery. Rev. Jorge Cabrera will officiate. Arrangements are under the direction of Nobles Funeral Chapel. Orlando was born April 16, 1971 in Xicotencatl, Tamaulipas Mexico to Rosalio Cosino and Demetria Lanciego. He married Luciana Garcia September 30, 1994 and together they had two sons and a daughter. Orlando was a carpenter by trade. He could build you anything out of some wood. He enjoyed spending time with his family – his kids were his everything. He also enjoyed fishing, dancing, and playing baseball. One of the things that he enjoyed to do so much was to go eat out at restaurants. He loved when new ones came in because you better believe he was one of their first customers. Orlando always had a good time and he never met a stranger. He is survived by his wife, Luciana Cosino; daughter Daniella Cosino; sons Jonathan and Cristian Cosino, all of Navasota; sisters and brothers-in-law Guillermina and Jesus Reynaga, Raquel and Otilio Mendez, Olga and Enrique Garcia and Oliva and Jesus Badillo, all of Mexico; brothers and sisters-in-law Nicanor and Maria Cosino, Quirino Cosino, Juan and Rosalba Cosino, Noe and Gloria Cosino, all of Navasota; and a host of Cosino family. Serving as pallbearers are Samuel Reynaga, Javier Olvera, Jose Cosino, Guadalupe Cosino, Jr., Ivan Cosino and Rigoberto Valladares. Orlando was preceded in death by his father Rosalio Cosino, his mother Demetria Lanciego, maternal grandmother Maria Lugo, paternal grandmother Eulalia Munoz and paternal grandfather Silvestre Cosino. You are invited to leave kind words and fond memories at www.noblesfuneral.com.

The family of Mr. Orlando Cosino created this Life Tributes page to make it easy to share your memories.

Send flowers to the Cosino family.