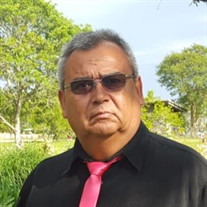 Mr. Oscar Alejandro, Jr., 52, of Navasota passed away Friday, August 5th at Scott & White Hospital in Temple, Texas. Visitation with family and friends will be held Wednesday, August 10th from 5:00 - 7:00pm at Nobles Funeral Chapel in Navasota. A celebration of his life will be at 10:00am, Thursday, August 11th, also at the funeral home. Interment will follow in Oakland Cemetery. Rev. Henry Sanders will officiate. Arrangements are under the direction of Nobles Funeral Chapel. Oscar was born in Harlingen, Texas on February 27, 1963 to Oscar and Martina (Hinojosa) Alejandro. Shortly after, the family moved to Houston. During the mid 1970's, the Alejandro family relocated to Navasota, where Oscar graduated from high school in 1982. He married Stacey Boudreau in 2004. He loved Nascar, family time, grilling and was a hard core Texas Longhorn fan. He is survived by his parents, Oscar Sr and Martina Alejandro; wife, Stacey Alejandro of Navasota; daughter Gabrielle Nicole Alejandro of Navasota; sons Justin Reece Wayland and Michael Anthony Alejandro, both of Navasota; sisters and brother-in-law Zenaida Alejandro of Washington and Nora and Donald Fowler of Plantersville; brother and sister-in-law Jaime and Jodi Alejandro of Bryan and a grandson, Wayland. Serving as pallbearers are Don Fowler of Plantersville, Jaime, Christopher, Jazzmin and Ivann Alejandro, all of Bryan. Preceding him in death were grandparents. You are invited to leave kind words and fond memories at www.noblesfuneral.com.

The family of Mr. Oscar Alejandro created this Life Tributes page to make it easy to share your memories.

Send flowers to the Alejandro family.