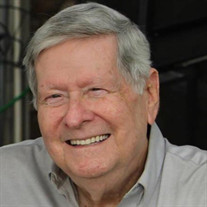 On October 21, 2021, at 7:11 pm, the Craddock family lost their rock and their patriarch, and the community lost a remarkable citizen. Frankie Pat Craddock Sr. left this world surrounded by his family, arm-in-arm and praying for his peaceful... View Obituary & Service Information

The family of Pat Craddock created this Life Tributes page to make it easy to share your memories.

Send flowers to the Craddock family.