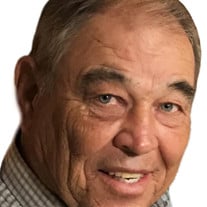 Patrick S. Phillips, 72, of Richards, peacefully passed away on Tuesday, March 24, 2020 at his beloved home. Due to concerns and restrictions placed by the CDC about the COVID-19 (corona) virus, all services will be limited to 10 guests present at a time. Calling hours will be held Thursday, March 26th from 2:00 pm – 7:00 pm at Nobles Funeral Chapel. Msgr. Adam McCloskey will officiate the graveside services and Rite of Committal at 3:00 pm, Friday, March 27th at St. Joseph Catholic Church Cemetery in Stoneham. Arrangements have been entrusted to Nobles Funeral Chapel. Pat was born in Navasota on July 17, 1947 to Joseph and Josephine (Nowak) Phillips. He grew up in Plantersville where he acquired a passion for farming and ranching. He attended Navasota schools through 12th grade and later went on to graduate from Stephen F. Austin University. Pat married Jackie Elizabeth Ferguson on August 30, 1969 and together they enjoyed fifty years of marriage. He thoroughly enjoyed a long fruitful career in the oil and gas, exploration and production business in Houston, Texas. Pat was an honored member of the Petroleum Accounting Society of Houston for 35 years. His real passion however, was his ranch in Richards. He was a country boy at heart who learned to live, work, and enjoy life in both the country and the city. He and Jackie retired in 2013 to his ranch where he happily lived out his days raising cattle, cultivating hay, and making improvements to his land. Pat was a member of St. Joseph Catholic Church in Stoneham, as well as St. Stanislaus in Anderson. He was preceded in death by his parents, Joseph and Josephine Phillips; daughter Monica M. Phillips; brothers Thomas C. and Christopher M. Phillips; sister Teresa M. Phillips and sister-in-law Nancy K. Phillips. Serving as honorary pallbearers are Malcolm Phillips, William Kowis, Ted Phillips, Brad Hinze, Frank Nowak and Greg LaBove. Pat is survived by wife Jackie E. Phillips; son Patrick G. Phillips and wife Jennifer; daughter Kelly Phillips; grandchildren Caitlin Phillips, Brandon Phillips and Faith Fletcher; sister Pauline Michano and husband Ronald; brothers Walter J. Phillips and wife Lea Ann, Ted J. Phillips and wife Sandy, Malcome G. Phillips and wife Denise and several nieces and nephews. You are invited to leave kind words and fond memories at www.noblesfuneral.com.

Patrick S. Phillips, 72, of Richards, peacefully passed away on Tuesday, March 24, 2020 at his beloved home. Due to concerns and restrictions placed by the CDC about the COVID-19 (corona) virus, all services will be limited to 10 guests present... View Obituary & Service Information

The family of Mr. Patrick "Pat" Stanley Phillips created this Life Tributes page to make it easy to share your memories.

Send flowers to the Phillips family.