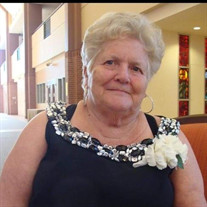 Patsy Muston, 74 of Navasota passed away Tuesday, May 16th at her residence. A celebration of her life will be held at 2:00pm, Friday, May 19th at Nobles Funeral Chapel. Rev. Kyle Childress will officiate. Arrangements are under the direction of Nobles Funeral Chapel. Patsy was born October 28, 1942 in San Gabriel, Texas to Percey Mrosko and Louise (Reed) Mrosko Morgan. She was the oldest of five children. Raised by her maternal grandparents, Jessie and Benjamin Reed, Patsy grew up and attended school in the small community of San Gabriel, Texas. Shortly after high school, Patsy married and began her family of five daughters and one son. She was a diehard devoted Elvis Presley fan, and made the pilgrimage of a lifetime to see Graceland in Memphis, one of her favorite memories. Patsy loved to travel. It didn’t matter where or when, she was always up for a spontaneous trip, particularly if it was to Oklahoma to play the penny slots at the casinos. Her greatest source of joy was her family and she loved being surrounded by the loves of her life, her grandchildren and great-grandchildren. Known for her fried chicken, she enjoyed cooking and family get-togethers. She had a weakness for sweets and could often be found with a 44oz coke in her hand. A recent knee replacement often hindered her from doing the things she loved. She is survived by her daughters and sons-in-law Danette Hicks and husband Paul, Cindy Frazier and husband Barry, Sherry Wuensche and husband Karl, Donna Lane and husband Tom and Kim Parker and husband Monte; son and daughter-in-law Dwayne Muston and wife Penny; sisters and brother-in-law Donna Dees and husband Billy and Debbie Morgan; brothers and sisters-in-law Billy Clyde Mrosko and wife Karen, and Randy Morgan and wife Patty; 23 grandchildren and 32 great-grandchildren. She was preceded in death by her grandparents, parents, Uncle Juggy Reed, Uncle Bill Reed, Aunt Inez Bittle and Aunt Nita Jean Klieber. You are invited to leave kind words and fond memories at www.noblesfuneral.com.

Patsy Muston, 74 of Navasota passed away Tuesday, May 16th at her residence. A celebration of her life will be held at 2:00pm, Friday, May 19th at Nobles Funeral Chapel. Rev. Kyle Childress will officiate. Arrangements are under the direction... View Obituary & Service Information

The family of Patsy Muston created this Life Tributes page to make it easy to share your memories.

Patsy Muston, 74 of Navasota passed away Tuesday, May 16th at...

Send flowers to the Muston family.