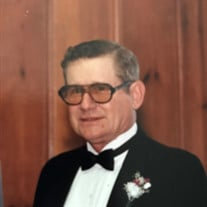 Paul M. Karkoska, 87 of Navasota passed away Saturday, July 6th at his home with his loved ones by his side. A memorial service celebrating his life will be held at 11:00 am, Saturday, July 20th at Millican United Methodist Church in Millican. Rev. Heather Leyland will officiate. Arrangements are under the direction of Nobles Funeral Chapel. Paul was born January 15, 1932 in Jarrell, Texas to John and Mary (Polacek) Karkoska. After high school, he enlisted in the U. S. Army and proudly served his country. While in basic training, he met Gloria Fay Peacock and the couple wrote letters to each other while he was stationed a year in Korea and a year in Japan. Once stateside, he married her in Austin on June 21, 1955. The couple remained in Austin and began their family. Paul and Gloria bowled in a league together for several years, and he also enjoyed playing softball and the accordian when he was younger. Paul was a member and was very active at his faith community, Millican United Methodist Church. He worked for Grant Prideco for several years and eventually retired from there, giving him more time for his family and watching sports on tv. Paul never met a stranger. He was such a compassionate person and had such a sense of humor. Paul is survived by his wife of 64 years, Gloria Karkoska; daughter Malinda Mummey; sons and daughters-in-law Mike and Karen Karkoska, Marshall and Tina Lynn Karkoska , David and Sandra Karkoska, Dennis Karkoska and Matt Karkoska; 16 grandchildren and numerous great-grandchildren. Preceding him in death were his parents and brothers Johnnie, Jerry, Ted, Clement, Joe and Frank Karkoska and sister Genevieve Miri. In lieu of flowers, please consider a memorial contribution to Millican United Methodist Church, P. O. Box 680, Millican, Texas 77866. You are invited to leave kind words and fond memories at www.noblesfuneral.com.

Paul M. Karkoska, 87 of Navasota passed away Saturday, July 6th at his home with his loved ones by his side. A memorial service celebrating his life will be held at 11:00 am, Saturday, July 20th at Millican United Methodist Church in Millican.... View Obituary & Service Information

The family of Mr. Paul M Karkoska created this Life Tributes page to make it easy to share your memories.

Send flowers to the Karkoska family.