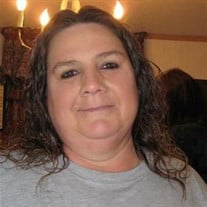 Paula Kay Cuevas, 53 of Bryan passed away Sunday, August 20th at CHI St. Joseph Regional Hospital in Bryan. Visitation with family and friends will be from 5:00 - 7:00 pm, Thursday, August 24th at Nobles Funeral Chapel. A celebration of her life will be at 10:00am, Friday, August 25th at Martin’s Prairie Missionary Baptist Church in Keith with interment to follow in the church cemetery. Rev. John High will officiate. Arrangements are under the direction of Nobles Funeral Chapel. Paula was born December 27, 1963 in Bryan, Texas to Robert Melesky and Velma (Davis) Melesky. She worked in home health care as a care provider and was loved dearly by her clients. Paula had three children who meant the world to her, and later when she became blessed with grandchildren, her heart swelled with more love than she could ever imagine. Family was a priority for her, and she made sure she always made time for them. Each Saturday, Paula and her husband had a standing date of shopping and going out to eat. Having learned to cook from her mother, she enjoyed sharing her knowledge in the kitchen with her own daughter. A devoted Dallas Cowboys fan, Paula also learned to love the Texas Aggies because her son-in-law was an Aggie; and if a good Lifetime movie was on TV, Paula and her granddaughter could be found watching it together. It was the time spent with those she loved that meant the most to her, and that which will be missed most of all by those who loved her. She is survived by her husband Flavio Cuevas; daughter and son-in-law Carmen and Jaime Lainez of Dallas, Texas; sons and daughters-in-law Eric and Randi Cuevas of Iola and Ricky Cuevas and Robin Mushinski of Bryan; sister Barbara Sharp of College Station and grandchildren Kamryn Michael, Raleigh Cuevas, McKray Cuevas and Maritza Lainez. Serving as pallbearers are Jaime Lainez, Kristofer Brice, Ben Medina, Josh Ortega, Lee Leonard and Chris Boring. Paula was preceded in death by her grandparents; mother Velma Bryant; brother Charles Bryant and father-in-law Julian Cuevas. You are invited to leave kind words and fond memories at www.noblesfuneral.com.

Paula Kay Cuevas, 53 of Bryan passed away Sunday, August 20th at CHI St. Joseph Regional Hospital in Bryan. Visitation with family and friends will be from 5:00 - 7:00 pm, Thursday, August 24th at Nobles Funeral Chapel. A celebration of her... View Obituary & Service Information

The family of Paula K. Cuevas created this Life Tributes page to make it easy to share your memories.

Send flowers to the Cuevas family.