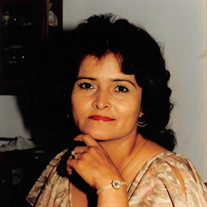 Pauline Acosta Cervantes, 79 of Navasota, passed away Saturday, October 23rd at her home. A celebration of her life will be held at 1:00 pm, Wednesday, October 27th at Nobles Funeral Chapel with visitation beginning at 10:00 am prior to the service. Pastor Henry Sanders will officiate. Arrangements are under the direction of Nobles Funeral Chapel. Pauline was born in Millican, Texas on December 1, 1941 to Jose and Adela (Aguilar) Acosta. She attended and graduated from Navasota High School. Pauline had many professions, however, her last job was with the Navasota School District, from where she retired. Pauline married the love of her life, Domingo Cervantes, in Grant, Michigan on August 15, 1964. Shortly afterward, they moved back to Texas and started their family in Navasota. Together they raised Joe, Domingo, Jr. “Bebe”, and Beverly. Sadly in 1971, BeBe lost his battle with Leukemia at the young age of six. Having two children with childhood illnesses, she then joined the March of Dimes team. She served as the Grimes County Chairman in the early to mid 70’s . She was dedicated to the cause and took pride knowing that she was not only helping her own children, but many others as well. The highlight of her volunteer work with March of Dimes was her invitation and attendance to the Governor’s Mansion in Austin for the Annual Tea, honoring Grimes County. Her hobbies were numerous. Baking cakes for all occasions, decorating them to perfection, making her famous tamales, sewing anything from wedding dresses to curtains. Her green thumb was proof that she loved all flowers and plants, especially roses. Receiving “Yard of the Month” twice only made her work harder in her yard. Family gatherings at her home were always full of delicious food which was always seasoned with love, followed by a good card game (let’s not mention who the cheater was!). Our family will never be the same without our Pauline, our momma, our sissy, GMA and lastly GG, which her great-grands named her. Pauline is survived by her husband of 57 years, Domingo Cervantes, Sr.; son and daughter-in-law Joe and Laura Cervantes; daughter and son-in-law Beverly and Greg Valdez; sister Yolanda Zaragoza; grandchildren Meagan Rae Cervantes (David), Sierra Jo Higginbotham (Travis), Jose Vidal (Joey), Douglas Bohot, Jr. (Jessica), Heather Caudell (Jordan), Ashley Miles (Jessie) and Albert Hernandez, III. , and great-grandchildren Kendall Rae, Kyler Ansley, Brodee Jo, Arrow Rose, Phoenix Lee, Blane Douglas, Weston Cash, Christina, Scarlett, Bethany and Jessie. She was preceded in death by her parents; son Domingo Cervantes, Jr., sisters Janie Tovar and Annie Munoz and brother, Raymond Acosta. You are invited to leave kind words and fond memories at www.noblesfuneral.com.

Pauline Acosta Cervantes, 79 of Navasota, passed away Saturday, October 23rd at her home. A celebration of her life will be held at 1:00 pm, Wednesday, October 27th at Nobles Funeral Chapel with visitation beginning at 10:00 am prior to the... View Obituary & Service Information

The family of Pauline Acosta Cervantes created this Life Tributes page to make it easy to share your memories.

Send flowers to the Cervantes family.