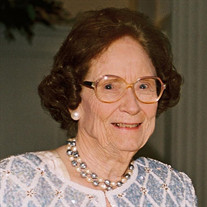 Wilma Pearl Talbert Lively, 105, passed away at home in Bedford, Texas on Wednesday, November 30, 2016, one month shy of her 106th birthday. Visitation with family and friends will be held on Saturday, December 3rd, from 4:00 – 6:00 p.m. at Nobles Funeral Chapel in Navasota. A celebration of her life will be on Sunday, December 4th, at 2:00 p.m. at the First Baptist Church of Navasota with the Rev. Clyde Larrabee officiating. Interment in Oakland Cemetery in Navasota will immediately follow the service. Arrangements are under the direction of Nobles Funeral Chapel. Pearl Lively was born December 30, 1910 in Clinton, Louisiana. She grew up in Liberty, Mississippi and upon finishing business school moved to Port Arthur, Texas where she met her husband of 44 years, James Otis Lively. In 1946, they moved from Port Arthur to Navasota where they raised their family. Pearl worked as a secretary for the Texas State Department of Public Affairs until retirement. Pearl and her husband had three children, James, John Robert, and Susanne; ten grandchildren and nine great-grandchildren. They were very proud of their children and made sacrifices and economized in every way so they could receive a college education – their children’s accomplishments proved their efforts to be worthwhile. Pearl lived for her family and her Christian beliefs. Education and the church were very important to Pearl. She was active in First Baptist Church of Navasota where she volunteered in many capacities. Pearl was primarily interested in children and was in charge of the Children’s Sunday School program and taught Sunday School for over 25 years. In 1998, she moved to Bedford, Texas to be close to her children and grandchildren. Pearl resided at Brookdale Eden Estates and was involved in many activities including the Newcomers Table, running the Country Store, attending Raniel’s Devotional and Brookdale Eden Estates Church Service on Sundays. She played Skip-bo, her favorite card game, well into her 102nd year. Pearl was preceded in death by her parents; husband, James Otis; two sisters, Inez and Susie; a brother Robert, and granddaughter Lisa Gail Lively. She is survived by her children, Dr. James Otis Lively and wife Marianna of Fredericksburg, John Robert Lively and wife Brooke of Fort Worth and Susanne Lively Gilmore and husband Donald of Flower Mound; grandchildren John Marc Lively and wife Angela, Clinton Lively, Courtney Lively and husband Michael Strober, Brooke Elizabeth Lively, John Robert Lively, Jr. and wife, Amy, Lauren Lively Schmid and husband Matt, Jennifer Gilmore Havard and husband Victor, Amy Gilmore Dennis and husband Jack, and Melissa Gilmore Lackey and husband, Craig; and nine great- grandchildren. Should friends desire, memorial contributions may be made to First Baptist Church of Navasota, 301 Church Street, Navasota, Texas 77868. You are invited to leave kind words and fond memories at www.noblesfuneral.com.

The family of Mrs. Pearl Talbert Lively created this Life Tributes page to make it easy to share your memories.

Wilma Pearl Talbert Lively, 105, passed away at home in Bedford,...

Send flowers to the Lively family.