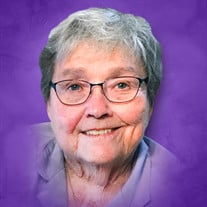 Peggy Joyce Kidd Crittenden, 88 of College Station, passed away peacefully on Monday, May 6th at Generations Center for Senior Living in College Station. Visitation with family and friends will be held from 10:00 am – 12:00 pm, Saturday, May 11th at Nobles Funeral Chapel in Navasota. A celebration of her life will be at 3:00pm, Saturday, May 11th at Wellborn Baptist Church in College Station followed by interment in Oakland Cemetery in Navasota. Rev. Jason Horine will officiate. Arrangements are under the direction of Nobles Funeral Chapel. Peggy was born in Hubbard, Texas on July 31, 1930 to William Frank Kidd and Stella Arabella Kay Kidd. She grew up on the family farm along with her two sisters and three brothers. After graduating high school in Frost, Texas, she enrolled in Baylor University Religious Education. She then transferred to Navarro College where her future began to take shape. She became interested in journalism and was elected as editor of the school paper. She completed two years at Navarro College and then transferred to East Texas State where she completed her college credits for Journalism. Her job search took her to Navasota where she worked for the Navasota Examiner owned by the Bob Whitten family. While working there she met Judge John R. Crittenden and they would later be married on May 7, 1955. Peggy went on to teach Journalism at Navasota High School and later moved to College Station where she taught Journalism and became the Public Information Officer for the School District. She enjoyed spending time with family and friends on Lake Somerville and Inks Lake, teaching anyone who would try to water ski. She enjoyed camping and the outdoors, all sports and photography. Many remember her with a camera in her hand as she captured many events on 35mm film. Many of her students called her "P. Critt", and her grandsons named her "Grams." These names will always have a special meaning to those who knew her. Peggy was a faithful follower of Jesus Christ and she wrote a brief autobiography entitled, "I Walked Where Jesus Led" and she certainly followed Jesus her whole life. She set a wonderful Christian example for all who knew her. She was a Godly woman. She was preceded in death by her parents and her loving husband, the late Judge John R. Crittenden of Navasota; sisters Virginia Allen and Lorene Crawford and brothers Thedford Kidd, Kay Kidd and Travis Kidd. Those surviving to carry on her walk are her son John Max Crittenden and wife Marilyn; grandsons Mitchell Jon and Mark Thomas Crittenden; nephew Les Miller and wife Marj and their four daughters and grandchildren; niece Kay Francis Gantt and her two sons, Jimmy and Bobby Gantt and their families and many more wonderful close friends and distant "cousins". Her contagious smile, caring personality and attitude toward people earned her many friends wherever she was. She loved her Wellborn Baptist Church family and wished that in lieu of flowers, a memorial contribution be made in her name to Wellborn Baptist Church, 14575 FM 2154, College Station, Texas 77845. You are invited to leave kind words and fond memories at www.noblesfuneral.com.

Peggy Joyce Kidd Crittenden, 88 of College Station, passed away peacefully on Monday, May 6th at Generations Center for Senior Living in College Station. Visitation with family and friends will be held from 10:00 am &#8211; 12:00 pm, Saturday,... View Obituary & Service Information

The family of Peggy Joyce Crittenden created this Life Tributes page to make it easy to share your memories.

Send flowers to the Crittenden family.