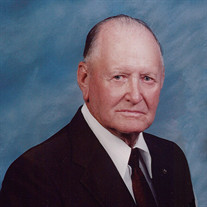 William H. “Pete” Wellmann, 91, of Washington, Texas passed away in the comfort of his home on Saturday, April 30, 2016. He was born on May 13, 1924 to Herman William and Frieda Maria Wellmann of Washington, Texas. Visitation is scheduled for Tuesday, May 3, 2016 at Nobles Funeral Chapel with family present from 5:00 – 7:00 p.m. Funeral Services will be Wednesday, May 4, 2016 at 2:30 p.m. at Friedens Church of Washington, UCC with Rev. Greg Felder officiating. Interment will follow in the Church Cemetery. Arrangements are under the direction of Nobles Funeral Chapel. Pete was married to Leona Mae Preuss on October 16, 1948. He was a proud father, grandfather and great grandfather to three sons, eight grandchildren and three great grandchildren. Mr. Wellmann was baptized, confirmed and a member of Friedens Church of Washington, UCC. He served on the church council numerous times. He was also a current member of the Navasota VFW, Washington Shooting Club and a former member of Navasota Lions Club. Pete served in World War II in the 25th Mechanized Cavalry Reconnaissance Troop as a sharp shooter and as Military Police. He was a dairy farmer, bus driver, owned and operated his own country store and retired from Trinity Industries of Navasota, Texas. Mr. Wellmann loved gardening and a well-manicured lawn, playing cards and dominoes and spending time with family and friends. Mr. Wellmann is survived by his sister-in law Elsie Schulze of Houston; his three sons and daughters-in-law, Charles and Carolyn Wellmann of Navasota, Craig and Cindy Wellmann and Tracy and Effie Wellmann of Washington; grandchildren and spouses Marsha and Wesley, William, Jennifer, Andrea and Ryan, Rebecca, Amanda and Justin, Candace and Dalton; great grandchildren Kayci, Jace and Jackson and numerous nieces and nephews. Mr. Wellmann was preceded in death by his parents; his wife, Leona Mae, of 55 years; his brother and sister-in-law, James and Clara Dell Wellmann of Navasota; his sisters and brothers-in-law, Elsie and Ray Ladd of Dallas and Margaret and Wallace Armatys of Navasota; his sisters-in-law and brothers-in-law Edna and Fritz Graeber of Austin, Janice and Don Marchand of Houston and Ernest Schulze of Houston. Serving as pallbearers are Dalton Wellmann and Cory Marek of Washington, William Wellmann of Navasota, Ryan Horton of Cypress, Steve Witt of Houston and Keith Stolz of New Braunfels. Honorary pallbearers are Dan Mohr, Wayne Bosse and Earl “Skipper” Stegemoeller of Washington, Victor McCain of Katy and Steve Connor of Houston. Memorials may be made to Friedens Church of Washington Memorial Fund. You are invited to leave kind words and fond memories at www.noblesfuneral.com.

The family of Mr. Pete Wellmann created this Life Tributes page to make it easy to share your memories.