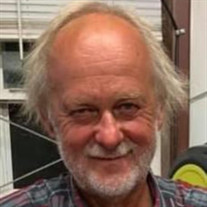 Mr. Philip “Pollock” Paul Podraza, 66 of Roans Prairie, passed away Thursday, September 23rd at his home. Visitation with family and friends will be held from 5:00 - 7:00 pm, Wednesday, September 29th, followed by a rosary at 7:00pm at Nobles Funeral Chapel. A funeral Mass celebrating his life will be held at 10:00 am, Thursday, September 30th at St. Stanislaus Catholic Church in Anderson with Rite of Committal following in the church cemetery. Rev. Eli Lopez will officiate. Arrangements are under the direction of Nobles Funeral Chapel. Philip was born in Navasota, Texas on November 4, 1954 to Tony and Alice (Busa) Podraza. As a young boy, he played Little League baseball and excelled at it. This would begin his lifelong passion for the sport. He attended school and graduated from Anderson-Shiro. Philip worked for Louisiana Pacific for many years and then the Tenaska plant in Roans Prairie until his retirement. He had a passion for Ford Mustangs and in his younger days he was often at the raceways. He never met a stranger and was well known around Roans Prairie and Anderson. Fondly called “The Mayor of Roans Prairie”, Philip knew all of the “goings on” in and around town. Each day in his black Ford Mustang, he made his stops at the Family Dollar, Valero (Circle K), Smoke Daddies food truck and his brother James’ Kettle Corn truck to lend him a hand. He seldom surprised anyone with his visits, as his cologne announced his presence long before he did. Philip was never short on words, he always had something to say and said it loudly and without a filter. It never mattered how many times he told a story, nor how many times you had already heard it, he would tell it every single time with the same amount of passion. Philip was a loyal brother, husband, father and friend and a heckuva grandpa. He never forgot a birthday and would always tried to make everyone feel special. He enjoyed being a handyman of sorts, it seemed there wasn’t much he couldn’t fix. Besides his family, he enjoyed a cold Miller Lite in the summer and hot toddies in the colder months, as well as going to the casino and playing the lottery. Philip was as much a part of Roans Prairie as the traffic at the four way stop – his daily presence will be missed! He is survived by his wife, Arlene Mosley; sons and daughters-in-law Philip and Victoria Podraza, Jeffery Podraza, Christopher Mosley and Lucas and Cindy Mosley; daughter and son-in-law Jennifer and George Albright; brother and sister-in-law James and Julita Podraza and grandchildren Ryleigh, Weston, Abigail, Autumn, Jadyn, Lovaya, Eli, Wayne and Brooklyn. Preceding him in death were his parents and grandparents. Serving as pallbearers are Philip T. Podraza, Jeffery M. Podraza, John W. Busa, Lucas A. Mosley, Kenneth Sunday and Ted Cleghorn. Honorary bearers are Christoper Mosley, Tony Pavlock, Wayne Busa, James Podraza and Tom Yanchak. “When tomorrow starts without me, and I'm not here to see, if the sun should rise and find your eyes, filled with tears for me. I wish so much you wouldn't cry, the way you did today, while thinking of the many things we didn't get to say. I know how much you love me, as much as I love you, and each time you think of me, I know you'll miss me too. When tomorrow starts without me, don't think we're far apart, for every time you think of me, I'm right there in your heart”. “The Lord is near to the brokenhearted and saves the crushed in spirit.” ~ Psalm 34:18 You are invited to leave kind words and fond memories at www.noblesfuneral.com.

The family of Philip "Pollock" Paul Podraza created this Life Tributes page to make it easy to share your memories.

Send flowers to the Podraza family.