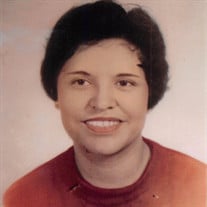 Ramona M. Ybarra, 76, of Navasota passed away Thursday, May 19th, 2016 at her home. Visitation with family and friends will be held from 5:00 – 7:00pm, Monday, May 23rd at Nobles Funeral Chapel. A parish rosary will follow at 7:00pm. A funeral Mass in celebration of her life will be held at 10:00am, Tuesday, May 24th at Christ Our Light Catholic Church in Navasota with Rev. Rodolfo “JoJo” Cal-Ortiz officiating. Rite of Committal will be in Oakland Cemetery. Arrangements are under the direction of Nobles Funeral Chapel. Ramona was born May 2, 1940 in Cameron, Texas to Ramon and Luisa Menchaca. Her mother passed away giving birth while Ramona was still an infant and she was raised by her father until his death when she was eight years old. She was then raised by relatives until the age of 18 when she met and married Miguel Ybarra. Together, they had eight children and resided in Navasota where Miguel provided for his large family by working in the cotton gins and then Interstate Southwest Forge. Ramona remained at home and cared for the children. She was a seamstress and sewed for extra income. She enjoyed playing bingo and visiting casinos, keeping her grandchildren in the summer, family get-togethers and music. She could be counted on for an honest opinion and speaking her mind. Ramona is survived by daughters and sons-in-law Connie and Jeffrey Cranford of Arlington, Sylvia and Eric Raherimanjato of Navasota, Caroline Espinoza of Bryan, Wendy Ybarra and Anthony Croce of Spring and Laura and John M. Flores of Navasota; son Mike Ybarra, Jr., of Navasota; grandchildren Christina Flores, Crystal Counts, Roxanna Cordova, Daniel and Priscilla Raherimanjato, Alfredo Diaz, Ramona Ramirez, Michael Flores, Alicia and Mike Ybarra, III and great-grandchildren Austin Espinoza and Jaycie Cordova. Preceding her in death were her parents; husband Miguel C. Ybarra; and sons Nick and Daniel Ybarra. Serving as pallbearers are Eric Raherimanjato, John Flores and Alfredo Diaz of Navasota, Horacio Ramirez of Houston, Jeffrey Cranford of Arlington and Anthony Croce of Spring.

The family of Mrs. Ramona M. Ybarra created this Life Tributes page to make it easy to share your memories.