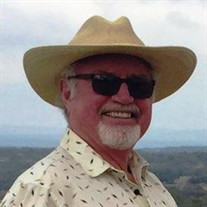 Randy Stapp, 66, of Fredericksburg and formerly of Millican, passed away unexpectedly after a sudden and brief illness, Thursday, September 10th at M.D. Anderson Cancer Center in Houston. Visitation with family and friends will be held Tuesday, September 15th from 5:00-7:00 PM at Nobles Funeral Chapel. A memorial prayer service will follow at 7:00 PM with the Rev. Matthias Dinger officiating. Randy was born on December 13, 1953, in Bloomington, IL, to Jimmie Dale & Eleanor Mae Stapp. He married Vicki Wilson on April 28, 1973, in Spring, TX. Together they were blessed with two sons and built a life they loved. Professionally, Randy led with pride for many years at Tubular Finishing Works (Grant) and Navasota Industrial Supply. He loved his family and his friends that became family. Randy enjoyed watching his sons grow into men and become fathers themselves. He loved watching his grandchildren grow up and never failed to support them. They could always count on Pops to make them laugh, to cheer them on, to love them, and to simply make life more fun. Usually wearing his signature hat and sunglasses, Randy was always willing to help wherever needed. He embraced every function he attended and watched over others wherever he went. He got the job done, no matter what it was, serving behind the scenes with a loving heart, a big smile, and typically, a joke or two. If you were lucky enough to eat one of his deviled eggs, then consider yourself blessed because he made the best around. While living in the Brazos Valley, Randy served as President of the Shooting Club and enjoyed playing cards and shooting, mostly the bull, with this fun group. In recent years, Randy was a proud, active member of the Nimitz Rotary Club in Fredericksburg. Just this June, he was named Rotarian of the Year. With a smile on his face, Randy loved making parade floats for Hondo’s and serving his community. Randy was always a calm presence in the background, looking out for those he loved. We that love him, know that this will not change. He remains with us, watching from a loftier vantage point. He might have made deviled eggs, but he was always an angel to us and still is. Randy embraced the concept that “It’s 5 O’Clock Somewhere” and loved Michelob Ultra. He passed away at 5:00 PM and went home to Heaven to get a beer, where it is always 5:00. He was preceded in death by his parents and sister, Regina Stapp. Randy is survived by his wife Vicki Stapp of Fredericksburg, sons and daughters-in-law, Scott & Colleen Stapp of College Station and Philip & Stephanie Stapp of College Station, and grandchildren, Madalyn, Wilson, Tucker, and Presley Stapp. In lieu of flowers, memorial contributions may be made to Fredericksburg-Nimitz Rotary Club, PO Box 1686 Fredericksburg, TX 78624.

Randy Stapp, 66, of Fredericksburg and formerly of Millican, passed away unexpectedly after a sudden and brief illness, Thursday, September 10th at M.D. Anderson Cancer Center in Houston. Visitation with family and friends will be held Tuesday,... View Obituary & Service Information

The family of Mr. Randy Stapp created this Life Tributes page to make it easy to share your memories.

Randy Stapp, 66, of Fredericksburg and formerly of Millican,...

Send flowers to the Stapp family.