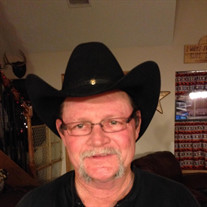 Mr. Charles Ray Jones, 60, of Iola, passed away Friday, May 27th at his home. Visitation with the family will be Monday, May 30th from 5:00-7:00pm at Nobles Funeral Chapel with a prayer service immediately following. Funeral services are scheduled for Tuesday, May 31st at 10:00am at Zion Lutheran Church in Anderson with the Rev. Kermit Bostelman officiating. Interment will follow in the church cemetery. Arrangements are under the direction of Nobles Funeral Chapel. Ray was born in Navasota on September 18, 1955, to John Jones & Drunell Norwood. He married Nancy Price on June 9, 2001. Most of his career was spent as a truck driver, most recently with the Texas Department of Criminal Justice. An avid outdoorsman, he loved animals and was an exceptional cook and BBQ pit master. He also served Zion Lutheran Church as an elder and trustee of the church. Left to cherish his memories are his wife Nancy Jones of Iola; mother Drunell Norwood of Navasota; sons, Jared Jones and wife Ashley of College Station and Darrell Jones of Willis; sisters, Evelyn Matney and husband Jearl of Mesquite, Tootie Finke of Navasota, and Frances Crawford of Montgomery; brothers, Johnny Jones and wife Vickie of Huntsville and Ronnie Norwood and wife Brenda of Santa Fe; and grandchildren, Darren, Christopher, Tinzey, McKenzie, Jillian, and Lane Jones. He was preceded in death by his father, John Luther Jones. Serving as pallbearers are Ronnie Norwood, Jr. of Santa Fe, Garrett Norwood of Santa Fe, Michael Norwood of Oakhurst, Brandon Finke of Fayetteville, Dewayne Matney of Mesquite and Chris Parker of Bedias. In lieu of flowers, memorial contributions may be made to the Witness & Outreach Committee of Zion Lutheran Church, PO Box 409, Anderson, TX 77830.

Mr. Charles Ray Jones, 60, of Iola, passed away Friday, May 27th at his home. Visitation with the family will be Monday, May 30th from 5:00-7:00pm at Nobles Funeral Chapel with a prayer service immediately following. Funeral services are scheduled... View Obituary & Service Information

The family of Mr. Ray Jones created this Life Tributes page to make it easy to share your memories.

Send flowers to the Jones family.