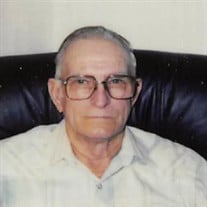 Richard Norman Coneley, 89 of Iola, passed away Saturday, November 28, 2020. A memorial graveside service will be held Wednesday, December 16, 2020 at 11:00 am at Evergreen Freewill Cemetery in Keith, Texas. Rev. Tim Owens will officiate. Arrangements are under the direction of Nobles Funeral Chapel. Richard was born July 13, 1931 in Iola, Texas to Roscoe and Willie Coneley. He graduated from Iola High School in 1948 and was married to his wife, Esta Merle for 40 years. Richard was raised on a farm in the Keith community along with his four brothers and a sister. He was always involved in cotton farming and raising and showing livestock. Richard, along with another student from Iola High School, were the first to earn the Lone Star Farmer Degree. Richard was a member of Martin’s Prairie Baptist Church and a past president of Martin’s Prairie Cemetery Association. He was also a member of the Iola Volunteer Fire Department for 13 years, serving as president for three of those years. He will be remembered as the owner of Country Firewood and his resale shop in Carlos, Texas, fondly referred to as the “Carlos Walmart”. Before his illness, he was an avid reader of westerns while many would not consider it a hobby, Richard loved being on his lawnmower, probably second only to his beloved Blue Bell ice cream. And no, he would not accept a substitute, nor could you sneak in an “imposter” off-brand. He is survived by his daughter and son-in-law, Elaine and Mitchell Beene; sons and daughter-in-law Mitchel Coneley and Michael and Donna Coneley; step-sons Bobby Halley and wife Nell Rose and Nickey Halley; grandchildren Tracey Beene, Shelby Route, Courtney Rosow, Darren Schrameck, Brandy Bradicich, Kristy Hamilton, Bobby G. Halley and Christina Roijas; 17 great-grandchildren and one great-great grandchild. Richard was preceded in death by his parents; wife Esta Merle Coneley; sister Lena Finley and four brothers, Carroll, Frank Donald, E. R., Jr., and Gene Coneley. The family would like to thank LaRue Hogate for her help in caring for our dad. It is also with deepest gratitude that we thank Hospice Brazos Valley for their service and support the past three years. You are invited to leave kind words and fond memories at www.noblesfuneral.com.

The family of Mr. Richard Norman Coneley created this Life Tributes page to make it easy to share your memories.

Send flowers to the Coneley family.