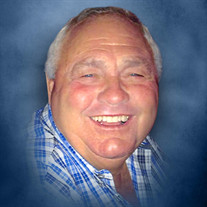 Rickey Dale Binford, 67, of Navasota, passed away Tuesday, December 3rd at his home. Visitation with family and friends will be held from 5:00 - 7:00 pm, Saturday, December 7th at Nobles Funeral Chapel, followed by a prayer service at 7:00 pm. A celebration of his life will be at 2:00 pm, Sunday, December 8th at Trinity Lutheran Church in Navasota with interment following in Oakland Cemetery. Rev. Matthias Dinger will officiate. Arrangements are under the direction of Nobles Funeral Chapel. Rickey was born October 17, 1952 in Navasota, Texas to George and Doris (Schatstall) Binford. He married Paula Finke at St. Patricks Catholic Church in Navasota on December 28, 1985 and together they had two children. There were few things in life that Rickey enjoyed more than raising cattle, except maybe seeing the Grimes County line if he had to travel away from it. He would always comment that he could “breathe a little easier now” once he crossed the county line on his way back home. Rickey was a larger than life personality that never met a stranger, though ironically enough he wasn’t good at remembering their names. He had a way around that though. He handed out nicknames to people, often dubbing them “Junior” for lack of a better one that came to mind. He enjoyed meeting people and learning about where they were from. He was a devoted husband, doting father, brand new grandpa, loving son and loyal friend. He will be missed by those he shared his life with. Rickey is survived by his loving wife of close to 34 years, Paula Binford; son and daughter-in-law Will and Haley Binford; daughter Ricklyn Binford; mother Doris Binford; grandson Stetson Binford; sister-in-law and brother-in-law Marla and Danny Gurka; niece Amberly Gurka (Robby Brian); nephew Tyler Gurka (Abbie); great niece Farrah Sechelski; in-laws Thomas and Lois Finke and numerous aunts, uncles, cousins and friends. Serving as pallbearers are Hunter Harrington, Ty Brzozowski, Greg Goudeau, Peyton Binford, Heston Binford, Tyler Gurka, Kye Hildreth and Reyes Silvan. He was preceded in death by his father, Sam Binford and sister-in-law, Pam Finke. In lieu of flowers, please consider a memorial contribution in Rickey's name to Trinity Lutheran Church Preschool or Trinity Lutheran Church LWML, 1530 East Washington, Navasota, Texas 77868. You are invited to leave kind words and fond memories at www.noblesfuneral.com.

Rickey Dale Binford, 67, of Navasota, passed away Tuesday, December 3rd at his home. Visitation with family and friends will be held from 5:00 - 7:00 pm, Saturday, December 7th at Nobles Funeral Chapel, followed by a prayer service at 7:00 pm.... View Obituary & Service Information

The family of Rickey Dale Binford created this Life Tributes page to make it easy to share your memories.

Send flowers to the Binford family.