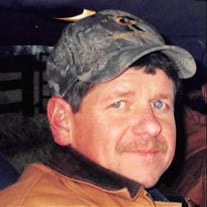 Rickey Wayne Gurka “JaJa”, 56 of Navasota passed away Friday, February 15th at Golden Creek Nursing and Rehab. Visitation with family and friends will be held from 5:00 - 7:00pm, Monday, February 18th at Nobles Funeral Chapel, followed by a rosary at 7:00pm. A funeral Mass to celebrate his life will be at 10:30am, Tuesday, February 19th at St. Stanislaus Catholic Church in Anderson. Rev. Eli Lopez will officiate. Arrangements are under the direction of Nobles Funeral Chapel. Rickey was born in Houston, Texas on July 16, 1962 to Steven and Cecilia (Kapchinski) Gurka. The family moved to Navasota when Rickey was 16 where he attended high school. He worked for St. Joseph Hospital in Material Maintenance for 18 years, 10 of which were in Bryan, then eight years at the Navasota location. Rickey enjoyed the outdoors and was an avid deer hunter and fisherman. He knew the blackjacks like the back of his hand and loved just riding the country roads. When he was younger, he raised coon dogs and enjoyed coon hunting. He was very social and outgoing and known as a practical joker to those closest to him. Rickey’s proudest accomplishment was his family. He was a devoted father and JaJa and cherished the time he spent with them. Rickey is survived by his daughters and sons-in-law, Jennifer and Josh Katkoski of Liberty Hill and Kelli and Stanley Purvis of Bryan; sons and future daughter-in-law Brian Gurka of Bryan and Kevin Gurka and fiance Mikaela Gagne of College Station; mother Cecilia Gurka of Navasota; sister and brother-in-law Judy and Jimmy LeFlore of Navasota; brothers and sister-in-law Steven Gurka of Navasota, Danny and Marla Gurka of Navasota, Randy Gurka of Navasota and Robert Buscha of Bastrop; nine grandchildren, Colby Gurka, Daylin Gurka, Chandler Katkoski, Kenzie Rangel, Alexis Gurka, Brody Purvis, Parker Katkoski, Liam Purvis and Owen Katkoski and numerous nieces, nephews, cousins and friends. Serving as pallbearers are Danny Gurka, Randy Gurka, Stephen Gurka, Jimmy LeFlore, Josh Katkoski and Rodney Sechelski. Rickey was preceded in death by his father, Steve Gurka and grandparents. You are invited to leave kind words and fond memories at www.noblesfuneral.com.

The family of Mr. Rickey Wayne Gurka created this Life Tributes page to make it easy to share your memories.

Send flowers to the Gurka family.