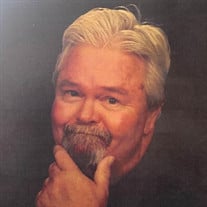 Rickey Wehmeyer, 66, was suddenly and unexpectedly called to join the Lord Monday May 18, 2020. A private memorial service will be held at Zion Lutheran Church in Anderson with Reverend Kermit Bostelman officiating. Due to concerns surrounding the COVID-19 pandemic, a private memorial service will be held by invitation only. Arrangements are under the direction of Nobles Funeral Chapel. Rickey was the only child born on February 22, 1954 to Fred William and Maurine Becker Wehmeyer. He was the light of their lives. He was baptized on March 24, 1954 at Gethsemane Lutheran Church in Houston. He later publicly confirmed his faith at St. Matthews Lutheran Church in Spring, on April 7, 1968. Rickey graduated from Spring High School in 1972. He then attended Sam Houston State University in Huntsville where he pursued an education in Business. While at Sam Houston he became a member of Pi Kappa Alpha fraternity where he would continue and make great life long friends. In April of 1997, Rickey married the love of his life, his soulmate, Julie Johnson. Together they were blessed with their wonderful and much loved daughter Bailey Marie. While Julie was the smiling face of the Anderson Water Company, Rickey was the backbone. However, he could always be counted on to have a joke, a smile, and kind words for others. (provided he had already had his first cup of coffee for the day!) Together they were a successful team at the water company! Very few people can tell a story or joke as well as Rickey! Friends and relatives will miss those stories so very much! This was a trait that Rickey learned from his grandfather, Fritz. Rickey was preceded in death by his wife Julie, his parents Fred and Maurine Wehmeyer, and father in law Richard Johnson. Those left to honor Rickey’s memory are his daughter Bailey Marie Wehmeyer of Anderson; his mother in law Fran Johnson of The Woodlands; sister in law and husband Marsha and Richard Crawford, Jr. of Sarasota, Florida; nephew Richard H. Crawford III also of Sarasota Florida; and niece Jennifer Ann Crawford of Tyler; and many cousins in the Wehmeyer family. In lieu of flowers, Bailey asks that you consider a memorial contribution in Rickey’s name to any Breast Cancer Awareness Foundation. You are invited to leave kind words and fond memories at www.noblesfuneral.com.

Rickey Wehmeyer, 66, was suddenly and unexpectedly called to join the Lord Monday May 18, 2020. A private memorial service will be held at Zion Lutheran Church in Anderson with Reverend Kermit Bostelman officiating. Due to concerns surrounding... View Obituary & Service Information

The family of Mr. Rickey Wehmeyer created this Life Tributes page to make it easy to share your memories.

Rickey Wehmeyer, 66, was suddenly and unexpectedly called to...

Send flowers to the Wehmeyer family.