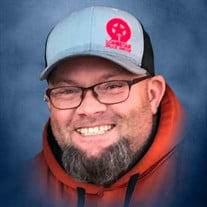 Roger Lynn Mays, 38 of Navasota, passed away Tuesday, December 18th at CHI St. Joseph Hospital in Bryan, Texas. A memorial service in celebration of his life will be held at 11:00 am, Thursday, December 27th at First Baptist Church of Navasota. Rev. Clyde Larrabee will officiate. Arrangements are under the direction of Nobles Funeral Chapel. Roger was born on July 11, 1980 in Abilene, Texas to Roger Sims and Vicki Henderson. When he was a child, his mother married Farrell Mays who legally adopted Roger, and his last name was changed to Mays. Roger later moved to Austin to live with family friends where he attended McNeil High School. He married and had three children, Isabella, Chandler and Dominick. In 2008, Roger met Shawn Hughey and they married on September 10, 2011. Together they had one son, Layton. He supported his young family by working as a mechanic, a field he understood well and was talented in. Roger was a family man, and his family was the center of his world. He enjoyed the outdoors, football, going to the movies, country music and was extremely proud of his Irish heritage and dreamt of visiting Ireland someday. He leaves to cherish his memory his wife Shawn Mays of Navasota; children Isabella, Chandler, Dominick and Layton, all of Navasota; brothers and sisters-in-law Sam Mays of Cisco, Jon and Brittnay Mays of Killeen and Dallas and Heather Smyer of Leander; his parents Farrell and Vicki Mays of Abilene and Roger and Mary Sims of Baird; grandmother Nana Pat Floyd and numerous friends and extended family members. Roger was preceded in death by his great-great grandmother Clonie Burk, great-grandmother Martha Neeley, grandparents Doris and James Mays, and uncles Johnny Henderson and Jerry Allen. You are invited to leave kind words and fond memories at www.noblesfuneral.com.

Roger Lynn Mays, 38 of Navasota, passed away Tuesday, December 18th at CHI St. Joseph Hospital in Bryan, Texas. A memorial service in celebration of his life will be held at 11:00 am, Thursday, December 27th at First Baptist Church of Navasota.... View Obituary & Service Information

The family of Mr. Roger Lynn Mays created this Life Tributes page to make it easy to share your memories.

Send flowers to the Mays family.