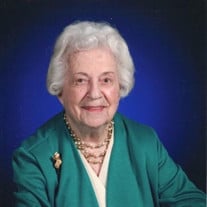 Ruth Nemir Harris, age 104, died on December 28, 2021 in Austin, Texas. Services honoring Ruth Nemir Harris’ life will be held on Tuesday, January 4, 2022, at 11:00 am at Nobles Funeral Chapel, 402 E. Blackshear St., Navasota, Texas with burial service to follow at Oakland Cemetery. Arrangements are under the direction of Nobles Funeral Chapel. Ruth was born November 20, 1917 in Navasota, Texas to Ida and Paul Nemir, the fourth of seven children. After graduating from public school in Navasota, Ruth attended Rice University. However, because she wanted to pursue a Bachelor’s Degree in Education which was not offered at Rice University at that time, she transferred to the University of Texas in 1937 to then receive her degree in 1939. Ruth taught middle school in Franklin and Grand Prairie, Texas, before entering Civil Service in Dallas. In 1945, she moved to Los Angeles, California to work for the U.S. Employment Services. It was there she met Roy Clark Harris who became her husband for the next 41 years. They eventually moved to Texas, both working in Civil Service, and lived in Waco, Brownwood, El Paso, and Victoria. During this period Ruth and Roy were blessed with three boys. Ruth and Roy spent their retirement years in Austin, TX. Following Roy’s death in 1987, Ruth became a dedicated volunteer in the Austin community, especially in the Old Bakery Gift Shop, Recording for the Blind, and All Saints’ Episcopal Church where she remained active until her death. An accomplished writer, Ruth was an active member of the Austin Kwill Club, and had several stories and articles published in “Texas Outlook”, “Guideposts”, “Camperways”, “Texas Churchman”, and “Texas Episcopalian”. Ruth continued her never-ending desire for learning by participating in Lifetime Learning Classes, which included creative writing and poetry, French, gardening, cooking and various other courses. In addition, Ruth was an avid bridge player, playing at least once a week until she died. Ruth was preceded in death by her husband, parents, and her six siblings: Marie, Ralph, Lucille, Paul, Helen, and Robert. She is survived by her three sons: Roy and his wife Laurin, of Dallas; Tim and his wife, Angie of Georgetown; and Steve of Austin. Additionally, she is survived by grandchildren Amy Harris of Dallas, Laura Horner and husband Bob of Mineral Wells, and twins Brian Harris of Austin, and Michael Harris and wife, Julia of McAllen. She was also blessed with a great grandson, Carson Paul Horner, and great granddaughters, Harper Ruth Horner, Emily Grace and Claire Walker Harris. Ruth enjoyed a close relationship with nephews, Robert Nemir and wife, Jessica, of Navasota, and Bill Nemir of Austin, and numerous nieces. You are invited to leave kind words and fond memories at www.noblesfuneral.com.

The family of Mrs. Ruth Nemir Harris created this Life Tributes page to make it easy to share your memories.

Send flowers to the Harris family.