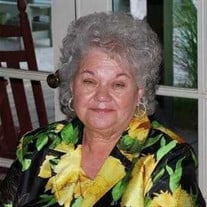 Mrs. Shirley Marie (Walker) Mattern Ward, 71, passed away Wednesday, April 26th at her home in Plantersville. Visitation with family and friends will be held Sunday, April 30th from 4:00 - 7:00pm at Nobles Funeral Home. A celebration of her life will be at 10:00am, Monday, May 1st, also at the funeral home. Rev. Tommy Largent will officiate. Arrangements are under the direction of Nobles Funeral Chapel. Shirley was born in Houston, Texas on June 20, 1945 to Walter Oran Walker and Vivian (Crouch) Walker. She was a homemaker and revolved her life around raising her children and grandchildren. When time permitted, she worked at Montgomery ISD cafeteria, also surrounding herself with children. She was a very giving, loving and selfless person. She possessed an incredible heart devoted to God and family. She enjoyed painting, sewing and cooking. Her favorite times and memories are those of her entire family being together at her home, bonding over a meal she had prepared. She and husband, Maxie enjoyed travelling and Montana was a very special place for them. Shirley is survived by her loving husband, Maxie Ward; daughter and son-in-law Mellodye and Ray Winkler of Huffman and daughter Deborah Mattern of Montgomery; son Anthony Mattern of Plantersville, sons and daughters-in-law Clayton and Bonnie Ward of Austin, Tracy and Lisa Ward of College Station and Michael and Jennifer Ward of Bryan; brother and sister-in-law Robert and Ollie Jane Walker of Washington and Elaine Walker of Navasota; grandchildren Matthew Mattern and Emily Oliver, Timmy Mattern and Kourtney Legge, Joey and Shelby Mattern, Rebecca Winkler, Katie and Jake Marrion, Noah Mattern, Hannah Mattern, Micah Mattern, Ashlee Ward, Autumn Ward, Magen Ward, Tyler Ward, Blake Ward, Jacob Ward, Dillon Ward; great-grandchildren Horace and Emerson Marion. She was preceded in death by her parents; Christy Mattern, husband; Walter Walker, brother and granddaughters Jessica Mattern and Sierra Simmons.

Mrs. Shirley Marie (Walker) Mattern Ward, 71, passed away Wednesday, April 26th at her home in Plantersville. Visitation with family and friends will be held Sunday, April 30th from 4:00 - 7:00pm at Nobles Funeral Home. A celebration of... View Obituary & Service Information

The family of Mrs. Shirley Marie Mattern Ward created this Life Tributes page to make it easy to share your memories.

Send flowers to the Ward family.