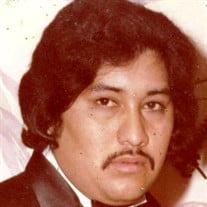 Mr. Simon Medina, Jr., 61 of Navasota, passed away Friday, February 12th at Golden Creek Nursing and Rehabilitation. Visitation with the family will begin at 5:00pm on Friday, February 19th at Nobles Funeral Chapel. A parish rosary will be... View Obituary & Service Information

The family of Mr. Simon Medina Jr. created this Life Tributes page to make it easy to share your memories.

Send flowers to the Medina family.