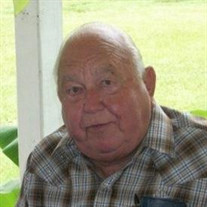 Mr. Stash Sechelski, Jr., 80, of Anderson, passed away Sunday, January 10th at Scott & White Hospital in Temple. Visitation with the family will be Wednesday, January 13th from 5:00-7:00pm at Nobles Funeral Chapel. A parish rosary will follow at 7:00pm. A funeral mass will be celebrated Thursday, January 14th at 2:00pm at St. Stanislaus Catholic Church with the Rev. Rodolfo “JoJo” Cal-Ortiz officiating. Rite of committal will follow in the church cemetery. Arrangements are under the direction of Nobles Funeral Chapel. Stash was born on October 22, 1935, in Anderson to Stash Sechelski, Sr. and Agnes Ubernowski. After graduating from high school, he served his country as a Corporal in the U.S. Army during the Korean War. An avid gardener, Stash also loved spending his time ranching and deer hunting. He was preceded in death by his parents; wife Agnes Sechelski; and brothers, Pete, Archie, and Philip Sechelski. Mr. Sechelski is survived by his daughters, Debbie Sechelski of Navasota, Susie Homeyer and husband Jerry of Navasota, Karen Sechelski of Anderson and Lisa McBroom of Flynn; sister and brother-in-law Rose & Felix Kimich of Anderson; 9 grandchildren; 8 great-grandchildren; and companion and dear friend Barbara Busa of Shiro. Serving as pallbearers are Scott Pasket of Montgomery, Alan Pasket of Montgomery, Chad Walkoviak of Anderson, Trevor McBroom of Flynn, Philip Robbins of Flynn, Eric Sechelski of Hempstead, Justin Homeyer of Navasota, and Larry Sechelski of Anderson. The family invites you to leave fond memories or kind words at www.noblesfuneral.com.

The family of Mr. Stash Sechelski Jr. created this Life Tributes page to make it easy to share your memories.

Send flowers to the Sechelski family.