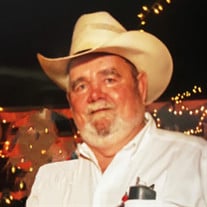 Sylvester James Karonka, 75 of Navasota, passed away Friday, January 8th, at Baylor Scott & White Health Center in College Station. Calling hours will be Tuesday, January 12th from 5:00-7:00PM at Nobles Funeral Chapel. A Funeral Mass will be celebrated Wednesday, January 13th, at 2:00PM at St. Stanislaus Catholic Church with the Rev. Ed Kucera officiating. Rite of Committal will follow in the church cemetery. Arrangements are under the direction of Nobles Funeral Chapel. Sylvester was born in Anderson on November 10, 1945, to Charlie & Ella (Sechelski) Karonka. He spent most of his life in the commercial and residential construction industries, including owning his own company in Navasota, Karonka Construction, Inc. He was a devoted hunter and fisherman who loved being outdoors. He also enjoyed his regular trips to the casino where he could be found any given weekend in front of his favorite slot machines. Sylvester was well-known locally for being an avid gardener who grew banner crops of tomatoes, as well as many other crops, including his favorite: watermelons. He was also a regularly active participant at the local Catholic church bazaars. He was preceded in death by his parents and brothers and sister, Floyd Karonka, Liz Leatherwood, Arch Karonka, and John Karonka. Sylvester is survived by his sons and daughters-in-law, Michael & Michele Karonka of Tomball, Steven & Lesley Karonka of Bryan, and Craig & Amanda Karonka of Brenham; long-time friend and companion Janet Nobles of Navasota; sister Vicki Stark of Woodville; and grandchildren, Kirstie, Kendell, Ashlynn, Anna, Tristin, Hannah, Hallie, Camdyn, and Luke along with numerous nieces and nephews. Serving as pallbearers are Jeff Stolz, Hardy Meekins, Mike Creagor, Mike Wetuski, Chris Thomasson, Joe Dover, Brett Madden, Gerald Schomburg, Tristin Everett, and Kendell Karonka In lieu of flowers, the family asks that you please donate in Sylvester’s memory at the following link: https://www.gofundme.com/f/honor-of-sylvester-karonka. You are also invited to leave fond memories and kind words at www.noblesfuneral.com.

The family of Mr. Sylvester J. Karonka created this Life Tributes page to make it easy to share your memories.

Send flowers to the Karonka family.