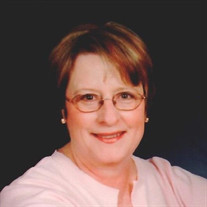 Tracy Boone Krumrey, 56, of Navasota passed away at her home on Sunday, February 4th. A memorial service celebrating her life will be held on Saturday, February 10th at First Baptist Church of Navasota at 3:00 p.m. officiated by Rev. Clyde Larrabee. Arrangements are under the direction of Nobles Funeral Chapel. Tracy was born in Houston on July 5, 1961. She moved to Navasota at age 8 and had a childhood filled with wonderful friends, Girl Scouts, sports, and a great close-knit extended family who made a point of it to gather for holidays and a yearly week-long family reunion at Camp Ben McCullough near Dripping Springs. She graduated from Navasota High School in 1979 and attended Texas A&M University majoring in psychology. At the time she passed, she had been a customer service representative at Prosperity Bank in College Station. Previously, she had been in the automotive industry as an award-winning salesperson for over 21 years for the Bluebonnet Motors/TEAM dealership. Tracy loved Bible study, cooking, singing, and acting for which she often received rave reviews in local theatre productions. Her favorite role, however, was being a mother and her three children were the lights of her life. She was known for her spirituality, wisdom, outgoing personality, and incredible sense of humor, but mostly for her loving heart. She is survived by her husband Randy Krumrey of Navasota; daughter and son-in-law Somer and Frank Sanchez of Anderson; son and daughter-in-law Matthew and Lori Foster of Anderson; daughter Andrea Krumrey of Navasota; parents Latham and Gail Boone of Navasota and Jerry and Betty Taylor of Pasadena; sister and brother-in-law Kelley and Frank McCormick of Pasadena; brothers and sisters-in-law Kirk and Lori Taylor of Deer Park and Kevin and Natalie Taylor of Santa Fe; brother Scott Boone of Navasota; and grandsons Christopher, Nathan, Riley, Tucker, and Jackson. She was preceded in death by grandson Ty. In lieu of flowers, the family suggests that memorials in Tracy’s name be made to the Upward Basketball and Cheerleading Program in care of First Baptist Church of Navasota, 301 Church Street, Navasota, Texas 77868. You are invited to leave kind words and fond memories at www.noblesfuneral.com.

Tracy Boone Krumrey, 56, of Navasota passed away at her home on Sunday, February 4th. A memorial service celebrating her life will be held on Saturday, February 10th at First Baptist Church of Navasota at 3:00 p.m. officiated by Rev. Clyde... View Obituary & Service Information

The family of Mrs. Tracy Boone Krumrey created this Life Tributes page to make it easy to share your memories.

Tracy Boone Krumrey, 56, of Navasota passed away at her home...

Send flowers to the Krumrey family.