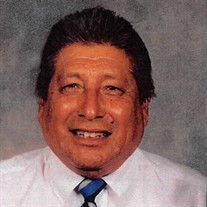 Mr. Valeriano Melchor, 88 of Navasota, passed away Tuesday, June 23rd at his home. Visitation with family and friends will be held from 5:00 - 7:00 pm, Friday, June 26th at Nobles Funeral Chapel with a rosary following at 7:00 pm. A celebration of his life will be held at 1:00 pm, Saturday, June 27th at Christ our Light Catholic Church with the Rite of Committal following in Oakland Cemetery. Rev. Eli Lopez will be the celebrant. Arrangements are under the direction of Nobles Funeral Chapel. Please note that due to current Covid-19 pandemic guidelines and recommendations, the church will only allow 125 people to gather inside the sanctuary. The family also kindly requests that all persons in attendance at the visitation and/or the funeral mass to please wear a mask. Valeriano was born April 14, 1932 in Anderson, Texas to Florentino and Gregoria (Rios) Melchor. He married Tomasa Alonzo and together they had three children. Valeriano worked for Mallard Tractor for well over 20 years and knew most everyone in Navasota. He loved making money and was an entrepreneur of sorts, at one time or another in his life he owned a small grocery store, travelled and sold retail items and even had a record label. When asked, he would tell you that he worked hard all of his life to ensure that his family was taken care of. He was proud of the fact that he built the house that he raised his children in and is still home to his wife. He retired just two years ago at the age of 86 and after that found it very difficult to be idle. For health reasons, he had to give up the keys at about the same time as retirement and this bothered him the most. It was a struggle for him to rely on others to bring him his daily McDonalds "fix" or to take him out on his favorite ride about town. Valeriano was a Dallas Cowboys fan, but oh how he loved the Houston Astros! He was a member of the United Latin American Citizens and Fiesta Patrias. He loved to dance and had a soft spot for animals. He enjoyed watching the birds, or feeding his nine cats that joined him each day on the porch. Always concerned that no one would take care of them if anything ever happened to him, a few of his last words were "don't forget to feed my cats!" He is survived by his wife of almost 70 years, Tomasa Melchor; sons and daughters-in-law Felix and Evelyn Melchor and John and Diana Melchor; daughter Magdalena Torres; grandchildren Chloe & Kyle Young, Darcey Melchor, Austin Melchor, Michelle Torres, Robert & Melissa Torres, Jr., Juan Torres, and Sementa & Jose Cosino; and great-grandchildren Matthew Baldobino, Jr., Joseph Baldobino, Myles Torres, Alexandria Torres, Consuelo Torres, Juliana Torres, Robert Torres, III, Emma Torres, Jordan Torres, Jacob Torres, Celeste Cosino, Trey Cosino, Alaney Cosino, and Michael Cosino. Serving as pallbearers are Joseph Baldobino, Jesus Cabrerra, Juan Torres, Jose Cosino, Robert Torres, Jr., Lupe Ybarra, Edward Flores and Nick Quezada. Valeriano was preceded in death by his parents; brother Julian Melchor and sisters Trinidad Ybarra and Rafaela Ybarra.

Mr. Valeriano Melchor, 88 of Navasota, passed away Tuesday, June 23rd at his home. Visitation with family and friends will be held from 5:00 - 7:00 pm, Friday, June 26th at Nobles Funeral Chapel with a rosary following at 7:00 pm. A celebration... View Obituary & Service Information

The family of Mr. Valeriano Melchor created this Life Tributes page to make it easy to share your memories.

Send flowers to the Melchor family.