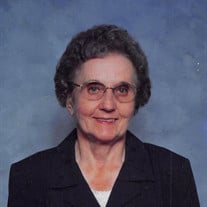 Mrs. Verna Seigle Sechelski, 90 of Anderson, passed away Wednesday, December 25th at CHI St. Joseph Hospital in Bryan. A gathering of family and friends will be held from 5:00 – 7:00 pm on Monday, December 30th at Nobles Funeral Chapel with a parish rosary following at 7:00 pm. A funeral Mass celebrating Verna’s life will be held at 10:00 am, Tuesday, December 31st at St. Stanislaus Catholic Church in Anderson with Rev. Elias Lopez as the celebrant. Rite of Commital will follow in the St. Stanislaus Church Cemetery. Arrangements are under the direction of Nobles Funeral Chapel. Verna was born on July 20, 1929 in Grimes County to John and Martha (Borski) Seigle. She attended school in Richards and then married Lewis P. Sechelski. Together they had three children. Verna worked with her husband in the dairy business and after his death, she continued working in the dairy and later the poultry business with her son. Verna enjoyed gardening and the outdoors. She was a wonderful cook and hosted many Sunday and holiday meals for her family. Worship and servitude were a huge part of Verna’s life. She was a life-long member of St. Stanislaus Catholic Church and a member of the St. Stanislaus Altar Society where she was very active for many years when she was younger. Verna is survived by daughters and son-in-law Carolyn and Nelson Zibilski of Brenham and Patricia (Jeannie) Sechelski of Anderson; son and daughter-in-law Raymond and Patricia Sechelski of Anderson; grandchildren Rodney Sechelski, Jeffrey Zibilski, Kristin Backhus, Jennifer Zibilski and Ryan Sechelski; great-grandchildren Kyleigh, Kaitlyn, Ty, Aidan, Eli and Avery; sisters Frances Walkoviak and Doris Matheson; and numerous other relatives. Serving as pallbearers are James Seigle, John Seigle, Patrick Seigle, Kenny Sechelski, Ryan Sechelski and Greg Backhus; Rodney Sechelski is named as honorary pallbearer. Mrs. Sechelski was preceded in death by her parents; husband Lewis P. Sechelski; sister Barbara Cortemelia and brothers Arch, Mack, Thomas and David Seigle. In lieu of flowers, please consider a memorial contribution in Mrs. Sechelski's name to the St. Stanislaus Building Fund, P. O. Box 210, Anderson, TX 77830. You are invited to leave kind words and fond memories at www.noblesfuneral.com.

The family of Mrs. Verna M. Sechelski created this Life Tributes page to make it easy to share your memories.

Send flowers to the Sechelski family.