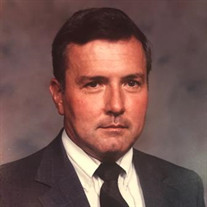 Reverend Victor H. Dindot, age 79, passed away at his home in Navasota, TX on Monday May 11, 2020. There will be a graveside service at 10:30 am on May 20, 2020 at Oakland Cemetery in Navasota with Rev. Matt Morse serving as the officiant. A memorial service will be held to celebrate his life at a later date. Arrangements are under the direction of Nobles Funeral Chapel. Vic was born to Hollas and Mabel Dindot on September 7, 1940 in Van Wert, OH. He graduated from Marysville High School in 1958, where he was a storied track star and football player. He received a Bachelor of Arts degree from Arizona State University in 1964 and a Master of Divinity degree from Austin Presbyterian Theological Seminary on May 20, 1968. He married Mary Katherine Engle on May 25, 1968. He became an ordained minister on June 23, 1968. After serving as an assistant minister at the Panorama Presbyterian Church in Panorama City, CA from 1968 to 1969, he was called to serve as the pastor for the First Presbyterian Church in Smithville, TX from 1969 to 1971 and then as the pastor at the First Presbyterian Church in Navasota, TX from 1971 to 1977. He was then called to serve as the pastor at the First Presbyterian Church in Lampasas, TX from 1977-1995, where he raised his three children. In addition, he served as the pastor at the Presbyterian Church in Adamsville, TX. While in Lampasas, he organized the Kids Together program, an after-school program for elementary students. He was then called to serve as the pastor for the Central Presbyterian Church in Waxahachie, TX from 1995-2006, where he founded Bethlehem Revisited, a reenactment of the birth of Jesus Christ. The story is portrayed by over a hundred actors and attended by over 30,000 spectators annually. He was honorably retired from the Grace Presbytery ministry in 2006 and later moved back to Navasota to be close to his children. Vic never fully retired. He volunteered at the Nehemiah Center of Navasota, which provides an after-school program for at-risk elementary students in the community. He served as the parish associate at the First Presbyterian Church in Navasota. He also volunteered at Baylor Scott & White Health in College Station, TX and at the CHI St. Joseph Health in Navasota, where he provided pastoral care for countless individuals. At the time of his passing, he was serving as the state supply pastor for the First Presbyterian Church in Caldwell, TX. He gave his last sermon on Mother’s Day, May 10, 2020. Vic was devoted to teaching young children about Christ. In 1980, he authored You Too Can Understand the Bible, a book written for young adults. In 2015, he authored How You Can Be Right With God, which describes his relationship to God and Jesus Christ – the book is dedicated to his grandchildren. Vic was a kind, loving and simple man. He touched the lives of everyone he met and made an indelible mark on his children and grandchildren. His faith was unwavering. He believed that this life is not the end but only the beginning of eternal life. He will be missed dearly. Vic was preceded in death by his parents Hollas and Mabel Dindot. He is survived by his wife of 52 years, Mary Katherine Dindot; his sister and brother-in-law, Kristina & Bruce Tillman; daughters and sons-in-law, Lisa & Jeff David; Kathleen & Ben Gamble; son and daughter-in-law, Scott & Lisa Dindot; grandchildren, Lauren Fairchild, Grant Fairchild, Payton Dindot, Tyler Dindot, Blake Dindot, Ashley Dindot; and, step-grandchildren, Haven and Hadleigh David. In lieu of flowers, the family suggests making a memorial contribution to the First Presbyterian Church in Navasota, TX. You are invited to leave kind words and fond memories at www.noblesfuneral.com.

Reverend Victor H. Dindot, age 79, passed away at his home in Navasota, TX on Monday May 11, 2020. There will be a graveside service at 10:30 am on May 20, 2020 at Oakland Cemetery in Navasota with Rev. Matt Morse serving as the officiant. A... View Obituary & Service Information

The family of Rev. Victor Dindot created this Life Tributes page to make it easy to share your memories.

Reverend Victor H. Dindot, age 79, passed away at his home in...

Send flowers to the Dindot family.