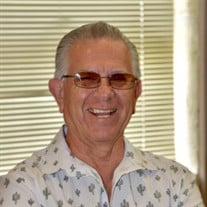 Mr. Victor Ostiguin, Jr., 74, of Navasota, passed away Saturday, January 23rd, at his home surrounded by his family. Visitation with family and friends will be held Thursday, January 28th, from 5:00 – 7:00 PM at Christ Our Light Catholic Church with a parish rosary following at 7:00 PM. A Funeral Mass will be celebrated Friday, January 29th, at 10:00 AM at the church with Rev. Elias Lopez serving as the celebrant. Rite of committal will follow in Oakland Cemetery. Arrangements are under the direction of Nobles Funeral Chapel. Victor was born in Navasota on December 12, 1946, to Victor and Guadalupe Ostiguin, Sr. Victor was a devoted husband, father, grandfather, and great-grandfather. He instilled the importance of treating everyone with respect and he never met a stranger. Victor’s grandchildren were his heart and joy. There’s no denying that his grandchildren and great grandchildren were the people that he loved the most. He attended all his grandchildren’s sporting events from t-ball, football and his granddaughter’s Friday night performances; even though he was in pain he did not want to miss them. He liked to sit outside on his front porch in his chair and tell his grandchildren about the good old days when life was so simple. He was an Army veteran, and he loved to sit and talk about his military career to his grandchildren. He worked for 43 years for the local telephone company until he retired. He was a very spiritual man and involved with the Knights of Columbus chapter and Christ Our Light Catholic Church. And so the story goes until we see him again... We love and miss you. He was preceded in death by his parents and brothers, Alex and Marcus Ostiguin. Mr. Ostiguin is survived by his wife, Melita Ostiguin of Navasota; daughters and sons-in-law, Priscilla & Tino Mata of Navasota, and Valerie & Paul Flores of Navasota; brother and sister-in-law, Andrew & Christina Ostiguin of Yuma, AZ; sisters and brothers-in-law, Modesta & Johnny Flores of Navasota, Louisa & Johnny Flores of Houston, Lupe & Roger Wilhite of San Springs, OK, Carolina & Tommy Ramirez of Bryan, and Jaine & Larry Baldwin of Anderson; grandchildren, P.J. Flores, Joerdan Mata, Gregory Flores, and Jayden Mata all of Navasota; and great-grandchildren, Brayden Flores and Adalynn Flores of Navasota. Serving as pallbearers are P.J. Flores, Joerdan Mata, Gregory Flores, Robert Mendez, John Michael Flores, and Dennis Sechelski. Honorary pallbearers include Andy Ostiguin, Alex Ostiguin, Don Munoz, Johnny Flores, Joaquin Sanchez, Lupe Ostiguin, Jesse Ostiguin, former friends and employees of CenturyLink, and members of the Knights of Columbus Council No. 4054. For those that desire, memorial contributions may be made to the Knights of Columbus Council No. 4054, PO Box 553, Anderson, TX 77830 or the Texas Veterans of Foreign Wars Post 4006, PO Box 370, Navasota, TX 77868.

Mr. Victor Ostiguin, Jr., 74, of Navasota, passed away Saturday, January 23rd, at his home surrounded by his family. Visitation with family and friends will be held Thursday, January 28th, from 5:00 &#8211; 7:00 PM at Christ Our Light Catholic... View Obituary & Service Information

The family of Mr. Victor Ostiguin Jr. created this Life Tributes page to make it easy to share your memories.

Send flowers to the Ostiguin family.