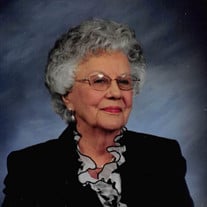 Victoria “Mack” Hulda Schroeder, 96 of Anderson, passed away Monday, December 4th at Hospice Brazos Valley Inpatient Facility in Bryan, Texas. Visitation with family and friends will be held Friday, December 8th from 10:00am until 2:00pm at Nobles Funeral Chapel with a celebration of her life following at 2:00pm. Rev. Lynette Bartel, A.I.M., of Messiah Lutheran Church in Cypress will officiate. Interment will be private at Brookside Memorial Park in Houston. Arrangements are under the direction of Nobles Funeral Chapel. Mrs. Schroeder was born September 15, 1921 in Clifton, TX to Joe Edward Anz and Annie Marie “Mary” (Kind) Anz. Mack got her nickname from her brothers because as a child she was always telling them how to fix farm equipment and cars so they called her “Mack the Mechanic”. She married Harold Lewis Schroeder from the community of Phillipsburg near Brenham in September, 1939. They had one son, Vernon Earl Schroeder. Harold and Mack came to Houston and worked side by side hanging wallpaper and painting in homes. Harold continued to build a career in home building and Mack continued to support him with her decorating ideas. As they moved throughout Houston from home to home, each one built by Harold, Mack was always involved in community and church activities. She supported Harold as a member of the Fraternal Order of Eagles #63 and later when he was State President of the Eagles. She served as a member of the Houston #63 Auxiliary for 70 years. Harold and Mack were among the original families forming Messiah Lutheran Church in Cypress. Harold gave his home building expertise to the building of the church and Mack sewed the banners to hang at the altar. In her later years she enjoyed designing and sewing quilt tops for the Anderson Senior Center Quilters. Mack was preceded in death by her parents; husband; brothers Christolph (Buddy), Andrew (Alex), and Jesse Anz; sisters Emilie Mueller and Flo Schroeder; niece-in-law Annette Schroeder; nephew Gaylan Schroeder, and nephew-in-law James Cline. She is survived by her son Vernon Schroeder and his wife Patty of Anderson; sister-in-law Evelyn Anz and her son Jay; nephews Bill Schroeder and sons Bryan and Russell, Ross Mueller and wife Arma and son Bart; niece-in-law Cherry Schroeder and son Steve Schroeder and daughter Jimi Driskill, nieces Anne Driver and son Greg, Roma Cline and son Marty, and LaNell Mueller, son Russell Necessary and daughter Michelle Crocker; and second cousin Charles Schroeder and their family members. Serving as pallbearers are Charles Schroeder, Russell Necessary, Bart Mueller, Jay Anz, Dennis Handley and Phil Dixon. The family thanks the members of the Grimes County Senior Center in Anderson for their friendship with Mack in her last years. The family also thanks the doctors and nurses of St. Joseph Hospital in Bryan and Navasota and Hospice Brazos Valley Inpatient Facility in Bryan for their care and compassion. In lieu of flowers contributions can be made in Mack’s name to the Grimes County Senior Center, 129 Main St., Anderson, TX, 77830; Messiah Lutheran Church 11522 Telge Rd., Cypress, TX 77429 or Hospice Brazos Valley Inpatient Facility 1600 Joseph Dr., Bryan, TX 77802. You are invited to leave kind words and fond memories at www.noblesfuneral.com.

The family of Mrs. Victoria "Mack" Schroeder created this Life Tributes page to make it easy to share your memories.

Send flowers to the Schroeder family.