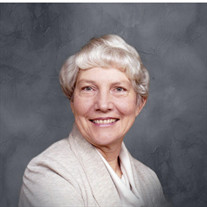 Virginia Greenwood Cook, 95 of Plano passed away Friday, June 15, 2019 at her home, surrounded by her children and wonderful caregivers. Visitation with family and friends will be from 6:00 pm to 8:00 pm, Tuesday, June 18th at Nobles Funeral Chapel. A celebration of her life will be held in the same place on Wednesday June 19th at 10:00 am with Rev.Clyde Larrabee officiating, followed by internment in Plantersville Cemetery. Friends and family will then gather for a meal at the family home in Plantersville. Arrangements are under the direction of Nobles Funeral Chapel. Virginia was the second of five children born to John Alfred and Virginia Forester Greenwood on April 13, 1924. She spent her early life in Plantersville in the midst of a large extended family, graduating Plantersville High School in 1941. She attended Sam Houston Teachers College and spent the war years working for Shell Oil Company at the Deer Park facility. After the war, on May 18, 1947, she married Billy L. Cook. After two children and Billy finishing his degree at Texas A&M University, they moved to Houston to work in the electrical industry. In 1955 they moved to Dallas, started a business and added another child. She worked tirelessly in the business and raised three children. In 1972 they moved to Los Angeles, California. They moved to Austin in 1980 and back to Houston in 1985. Billy passed away in 1988 and she continued to work for a large accounting firm until she retired in 1994. During those years she became the family caregiver, working to help sick or struggling family members and friends. She traveled extensively with her sisters and sister-in-law. In 2012, Virginia moved to Plano to be closer to family. She was an active member of Second Baptist Church in Houston and First Baptist Church in Plano. Left to cherish her memory are sister and brother-in-law, Grace and John D. Boswell; sons and daughters-in-law Vick and Audrey Cook of Plano, Rick Cook of Buford, Georgia, and Tom and Carla Cook of Los Angeles, California; six grandsons, three granddaughters; six great-grandsons; nine great-granddaughters; and slightly fewer cousins, nieces and nephews than there are grains of sand on the beach. Virginia was preceded in death by her parents, husband Billy Cook, niece Karen Martin Nelson, sister Anna Price, brother-in-law Bob Price, sister Mary G. Martin, brother-in-law Joe A. Martin, sister-in-law Eddie C. Greenwood, brother John A. Greenwood, II. You are invited to leave kind words and fond memories at www.noblesfuneral.com.

Virginia Greenwood Cook, 95 of Plano passed away Friday, June 15, 2019 at her home, surrounded by her children and wonderful caregivers. Visitation with family and friends will be from 6:00 pm to 8:00 pm, Tuesday, June 18th at Nobles Funeral... View Obituary & Service Information

The family of Mrs. Virginia Greenwood Cook created this Life Tributes page to make it easy to share your memories.

Send flowers to the Cook family.