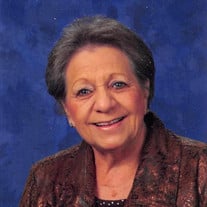 Virginia Ann Brewton French, 75 of Navasota, passed away after a lengthy battle with cancer at her home on Friday, March 6, 2020 with her beloved family by her side. Visitation will be held at Nobles Funeral Chapel Thursday, March 12, 2020 from 5:00 pm to 8:00 pm. Graveside services will be conducted Friday, March 13, 2020 10:00 am at Oakland Cemetery in Navasota. Rev. Jeremy Woodley will officiate. Arrangements are under the direction of Nobles Funeral Chapel. Virginia Ann was born April 21, 1944 in Navasota, Texas at the Brazos Valley Sanitarium to Irene Freitag Brewton and Robert “Bob” Brewton. She grew up in the city she loved, playing with her friends and riding their bicycles up and down Nolan and Church Street. Virginia received her Christian Baptism on April 17, 1949 into the Methodist Church in Navasota, Texas. Virginia attended Navasota Schools and graduated in the class of 1962. She went on to attend Blinn College in Brenham for two years and then transferred to Sam Houston State in Huntsville where she majored in education. On August 27,1966, she married Henry LaVearne Backhus of Anderson, Texas and together they had two sons, Jeffery LaVearne Backhus and Gregory Philip Backhus. Virginia worked for the Navasota Independent School System before retiring after 29 years. There was not one child that passed through the middle school that she did not have a special place for them in her heart. Each day was a joy for her to be there with them and see their smiling faces. On December 29, 1990 she married Robert Walter French from Oklahoma in Las Vegas, Nevada. They were married for 13 years which during this time they loved to travel and visit antique stores. Together they built a home and loved to work in their yard planting beautiful plants in their flower beds. She took great pride in having a well-kept and beautiful yard. Virginia was a very good cook using recipes that had been handed down by her mother, Irene Brewton who was known for her good cooking. Her fruit salad was always a must have at holiday gatherings. Virginia was an avid animal lover. She was actively involved in the Navasota Garden Club and also enjoyed collecting history and items of her beloved city, Navasota, Texas. Virginia is survived by her two sons, Jeffery LaVearne Backhus and wife Kimberly Rosenquist Backhus, granddaughter Ann-Marie Irene Backhus of Anderson and son Gregory Philip Backhus and wife Kristin Sechelski Backhus, and granddaughters Kyleigh Paige and Kaitlyn Brooke, twin grandsons Aidan Lane and Eli Shane Backhus of Navasota; brother Robert “Bobby” Brewton and wife Juanita Brewton of Navasota; nephew Hunter Brewton of San Marcos and niece Shelle Brewton of Austin. She was preceded in death by her parents and husband Walter French and her beloved fur baby, Cooter. Serving as pallbearers are Brian Backhus, Burk Backhus, Rodney Backhus, Hunter Brewton, and Homer Conner. Honorary pallbearers are Aidan and Eli Backhus. In lieu of flowers, donations may be made in her name to the Navasota Garden Club or to Hospice Brazos Valley.

Virginia Ann Brewton French, 75 of Navasota, passed away after a lengthy battle with cancer at her home on Friday, March 6, 2020 with her beloved family by her side. Visitation will be held at Nobles Funeral Chapel Thursday, March 12, 2020 from... View Obituary & Service Information

The family of Mrs. Virginia Ann Brewton French created this Life Tributes page to make it easy to share your memories.

Virginia Ann Brewton French, 75 of Navasota, passed away after...

Send flowers to the French family.