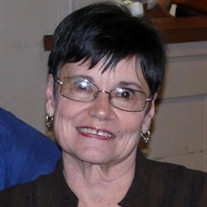 Mrs. Virginia Lee Patterson, 78 of Millican, passed away Monday, May 9th at CHI St. Joseph Regional Hospital in Bryan, Texas. Visitation with family and friends will be held from 5:30 – 7:30 pm, Thursday, May 12th at Nobles Funeral Chapel. A celebration of her life will be at 10:00 am, Friday, May 13th, also at the funeral home. Interment will follow in Wheat Cemetery located in Millican. Rev. C. McAllister “Mac” Vaughn will officiate. Arrangements are under the direction of Nobles Funeral Chapel. Virginia was born in Fort Wayne, Indiana to Harold and Marjorie (Spencer) Mann on November 15, 1943. She spent her younger years living in Houston, Texas. Once in high school, she met the love of her life Lester Patterson who was a cousin of her older sister Betty’s boyfriend from Navasota. Once they began dating, they were inseparable from that day forward and later married on December 26, 1961. Lester often tells the story that they married in front of a Christmas tree at the home of his parents, a simple wedding indeed but one which led to a lifetime of happiness. Together they had four children. In 1976 they moved their family to Millican and built a home in the country where they have lived for 46 years. Virginia worked in the banking business for most of her life and held various positions within several banks. In 1983 she went to work at The Bank of Navasota and was employed there for over 20 years until her retirement. While working there she made many lifelong friends whom she held dear to her heart always. Virginia and Lester had many things they enjoyed doing together such as traveling, fishing, hosting family functions and spending time with their children, grandchildren and great-grandchildren. Virginia’s favorite hobbies were cooking and trying out new recipes and reading which she spent countless hours doing. She is survived by her husband of 60 years, Lester Ray Patterson; daughters Tammy Falco and husband Gene; Robin Brietzke and husband David; son Lester Patterson Jr. and wife Valerie; sister Betty Burkhalter; brother Harold Roy; sister-in-law Donna Mann; brother-in-law Butch Norwood; 10 grandchildren, 17 great-grandchildren, 8 nieces and nephews and numerous great-nieces and nephews. Serving as pallbearers are Kevin Gurka, Brian Gurka, Gene Falco, Michael Norwood, Josh Katkoski and Arnold Kroll. Virginia was preceded in death by her parents, son Wesley David, sister Linda Norwood and brother Tim Mann. You are invited to leave kind words and fond memories at www.noblesfuneral.com.

Mrs. Virginia Lee Patterson, 78 of Millican, passed away Monday, May 9th at CHI St. Joseph Regional Hospital in Bryan, Texas. Visitation with family and friends will be held from 5:30 &#8211; 7:30 pm, Thursday, May 12th at Nobles... View Obituary & Service Information

The family of Virginia Patterson created this Life Tributes page to make it easy to share your memories.

Send flowers to the Patterson family.