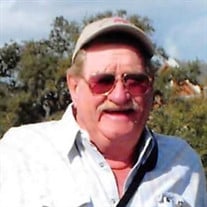 Mr. Lavon Smith, 83 of Anderson, passed away Saturday, January 9th at his home. Graveside services will be held Tuesday, January 12th at 2:00PM in Oak Park Cemetery in Alvin, TX. Arrangements are under the direction of Nobles Funeral Chapel. Lavon was born in Mart, Texas on December 24, 1937 to Curtis and Virginia "Boes" Smith. After high school, he joined the U. S. Army and proudly served his country. On April 6, 1958, in Bryan, Texas, Lavon married Janey Gripp. Upon his discharge from the service, he worked briefly shrimping, and then worked for Brown and Root, Inc., for several years until he purchased a tractor trailer rig and became an owner operator. At age 58, he and Janey moved to to their place in Anderson to raise cattle. They enjoyed traveling, pulling a fifth wheel travel trailer from Alaska to Washington, D.C. and then Half Moon Bay in California. He was a strong, indepndent man who never met and stranger and could sometimes be found tuning into a NASCAR race. He enjoyed throwing big barbeque functions for his family, friends and nieghbors. He is survived by his wife, Janey Louise Smith; son Adrian Smith; daughters and son-in-law Patricia Rowan and Sharon and James Mason; grandchildren Daniel Ziperovich, Thomas Ziperovich, Shannon Dutschke and Chuck Dutschke; four great grandchildren and 2 great-great grandchildren. He was preceded in death by his parents and three brothers. You are invited to leave kind words and fond memories at www.noblesfuneral.com.

The family of Mr. Vodie "Lavon" Smith created this Life Tributes page to make it easy to share your memories.

Send flowers to the Smith family.