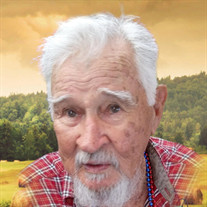 Wenceslaus Harold "Arch" Walkoviak, 93, passed away Sunday afternoon, March 10, 2019 at his home. Visitation with family and friends will be held from 5:00 - 7:00pm, Thursday, March 14th at Nobles Funeral Chapel. A parish rosary will follow at 7:00pm. A funeral Mass in celebration of his life will be at 10:00am, Friday, March 15th at St. Stanislaus Catholic Church in Anderson with Rite of Committal in the church cemetery. Monsignor Chester Borski will officiate. Arrangements are under the direction of Nobles Funeral Chapel. Wenceslaus was born September 4, 1925 to Thomas and Katherine Walkoviak. Wenceslaus grew up in Grimes County working on the family farm. He was called away from the family farm to serve in World War II as a member of the U.S. Army. Wenceslaus was preceded in death by his parents, all of his sisters and brothers and by his son, Kenny Walkoviak. Wenceslaus is survived by his son Larry Walkoviak and his wife Jo, his son Ronnie Walkoviak and his wife Sharleen and by his estranged wife of many years, Frances Seigle Walkoviak. He is also survived by 6 grandchildren and 12 great grandchildren. A Funeral Mass will be held on Friday, March 15, 2019 at 10:00 a.m. at St. Stanislaus Church in Anderson, Texas. Nobles Funeral Chapel in Navasota, Texas will be assisting with funeral arrangements. At 5:00 p.m. on Thursday, March 14, 2019, a public viewing will begin followed by a rosary service at 7:00 p.m. at Nobles Funeral Chapel. Serving as pallbearers will be the grandsons of Wenceslaus and they are: Aaron Walkoviak, Adam Walkoviak, Mark Walkoviak, Alan Walkoviak, Tommy Walkoviak and Michael Walkoviak. His two surviving sons, Larry Walkoviak and Ronnie Walkoviak, request that in lieu of flowers, a donation be made in his name to the charity of your choice.

The family of Mr. W. H. "Arch" Walkoviak created this Life Tributes page to make it easy to share your memories.

Send flowers to the Walkoviak family.