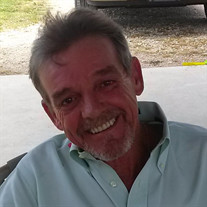 Warner Vincent Mickey, 57, of Roans Prairie, Texas slipped peacefully into the arms of his Savior on Monday, June 5th at his home with his loving wife, Robin at his side. Visitation with family and friends will be held from 9:00 – 11:00am on Saturday, June 10th at Nobles Funeral Chapel in Navasota, followed by a celebration of his life at 11:00am, also at the funeral home. Rev. Clyde Larrabee will officiate. Arrangements are under the direction of Nobles Funeral Chapel. Warner was born March 13, 1960 in Navasota, Texas to Ed Tom and Anna Mae (Harrington) Mickey. The family moved to Iola when he was in elementary school. Nicknamed “Bubba” at an early age, he was often seen accompanying his father on his milk truck route. Shortly after high school, Warner began driving his own route for Johnny Leibham. In his late 20’s, an electrical contractor and mentor took him under his wing and taught him everything he knew. He became an accomplished electrician and worked several years for Britt Rice and other electrical contractors in the Brazos Valley. He had a knack for building and fixing things “right”. He often said that he could do anything, the impossible just may take him a bit longer. He lived the majority of his life unsuccessfully chasing demons in an attempt at finding love and happiness, and then at age 50, that joy found him when he re-united with his high school sweetheart. Warner was sharp witted, quick with a smile and his laugh was contagious. He valued his friendships, and was a loyal protector of both the family and friends that he kept close. He loved road trips, flea markets, camping and floating the Guadalupe River. He found, later in life, the unconditional love that a dog can offer, and fell head over heels in love with the devotion and companionship that his Labs so eagerly gave him. Warner loved his grandbabies, and his eyes lit up when they would shriek “Poppy!” as they would run to him. He took joy in the simple things, and took nothing for granted. He saw the beauty in a sunset, and his favorite place to be was on his porch swing sitting next to the love of his life at day’s end, hand in hand watching the sun set and the fireflies appear. He is survived by his soulmate, Robin Statham-Mickey of Roans Prairie; sons Dylan and Cory Mickey of Missouri City; sisters and brother-in-law Eva and Eduardo Ulloa of Kurten and Owena Ann Mickey of Aspermont, TX; stepmother Margaret Mickey; half sister Pamela Mickey Valdez; half brothers James Earl Mickey and Tommy Mickey; step sisters Arretta Nepereny, Vickie Munoz and Tina Brewer; stepsons Chad and Randle Walkoviak and Jacob Johnson; grandchildren Hanna, Nolan and Allie Walkoviak; and numerous nieces and nephews. Serving as pallbearers are his brother-in-law, Eduardo Ulloa and the men he was honored to call his friends, John Wren, Mike Buelly, William “Chief” Hegemeyer, Ryan Rutledge, David Machac, Lonnie McWalters, Steve Swartzbach and Ryan Goodman. Warner was preceded in death by his parents and half brothers Edward “Eddie” Isbell and Todd Isbell. The family would like to thank the many, many friends who continued to amaze us with their love and prayers the past year. A special thank you to “his girls”, Sheila Blinka, Melanie Paris, Trina Hicks, LeLe Williams, Jean Scott, and Kathy Teague. More appreciation than words could ever convey to Hospice Brazos Valley for the tremendous support, love and care given to Warner; particularly his nurse angel, Casey Holden. In lieu of flowers, please consider a memorial donation in his memory to Hospice Brazos Valley, 502 West 26th Street, Bryan, TX 77803 or www.hospicebrazosvalley.org. You are invited to leave kind words and fond memories at www.noblesfuneral.com.

Warner Vincent Mickey, 57, of Roans Prairie, Texas slipped peacefully into the arms of his Savior on Monday, June 5th at his home with his loving wife, Robin at his side. Visitation with family and friends will be held from 9:00 &#8211; 11:00am... View Obituary & Service Information

The family of Warner Vincent Mickey created this Life Tributes page to make it easy to share your memories.

Send flowers to the Mickey family.