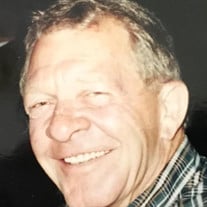 Mr. William P. “Bill” Hooks, 76, of Navasota, passed away Saturday, August 21st at his home. A Celebration of Life will be held at 12:30 pm, Saturday, September 18th at Camp Allen. Cremation arrangements were entrusted to Nobles Funeral Chapel. Bill was born within the Atchafalaya National Heritage Area near Port Barre, Louisiana on April 22, 1945 to Samuel and Lillian Hooks. Bill’s life was defined by water: a legacy of Cajun Culture characterized by fishing, hunting and comradery that would flow across his lifetime. As a teen, Bill set out for New Orleans, finding work as apprentice carpenter along the West Bank of the Mississippi. Later joined by brother Floyd, Bill rose to Master Carpenter under Thomas Mitchell of Texas, who took a shine to Bill, introducing him to his niece, Carolyne Clepper. Bill and Carolyne married and moved among Texas’ bayous for work while welcoming their first-born, Dona, into their Houston home. After a brief return to Louisiana, Bill moved his family back to Texas, settling within the Brazos Valley on Clepper Farm, where his son, Tony, was born. Known for his hard-driving work ethic, precision and resilience, Bill quickly rose to Construction Superintendent, managing construction of high-rise buildings, which today outline Houston’s sea of sky. With the Oil Bust, Bill retreated to the Brazos Valley, using his carpentry skills to support his family: he contracted to build lunch tables for Camp Allen from the garage of his family’s home. Camp Allen’s Rector loved Bill’s work, offering him a job in Maintenance. Rising like the waters that had buoyed his life, Bill promoted to Manager. At the helm of Maintenance, Bill kept the buildings, grounds and people of Camp Allen flowing along for 30 years. Eventually, he found another home on the water, within the banks of the Brazos, sharing his love of outdoors, fishing, and the comradery of his son and fellow fishermen. Retiring from Camp Allen, Bill built his homestead on “Bill’s Hill”, next door to his daughter Dona – who continues Bill’s legacy of building, living within the house her father built, improving it into a home for her own family – and son Tony, who built his own home, but with Bill’s fingerprints all over. “Time is like a River” – for Bill, the people he knew flowed across his life as a current might, softening his edges like the sandbars within the Rivers and Bayous he travelled, shaping him into the man everyone knew and loved – “for as soon as a thing has been seen, it is carried away, and another comes in its place, and this will be carried away too”. He is survived by daughter Dona Swarts, her husband Brad and granddaughters Baylee and Brennan; his son William A. “Tony” Hooks and his wife Lindsay; siblings Floyd Hooks (Susie), Nell Walcott (Allen), and Jane Stelly. His greatest survivorship are the infinite nephews and nieces, spanning generations, related by kinship and friendship, known to them simply as “Uncle Bill”. He was preceded in death by parents Samuel and Lillian, and brothers Joseph D. “JD” Hooks and Joseph L. “Bud” Hooks. For those who desire, memorial contributions may be made in Bill’s honor to Camp Allen’s Summer Camp Scholarship Fund. You are invited to leave kind words and fond memories at www.noblesfuneral.com.

Mr. William P. &#8220;Bill&#8221; Hooks, 76, of Navasota, passed away Saturday, August 21st at his home. A Celebration of Life will be held at 12:30 pm, Saturday, September 18th at Camp Allen. Cremation arrangements were entrusted to Nobles... View Obituary & Service Information

The family of Mr. William P. "Bill" Hooks created this Life Tributes page to make it easy to share your memories.

Send flowers to the Hooks family.